Team Japan Auto
Here is our Team Japan Auto livery for the 2021 season😃 Excited to share more news with you over the next weeks on the upcoming season!

Thanks to all the partners onboard, i can`t wait to get started

March 26, 2010: Moy, Devin and I are loading tires out of our storage unit to to go testing for Formula Drift Long Beach. Note the «no loading, no parking» sign on the ground. Good times!

TEAM JAPAN AUTO is the most winning drifting team in Norway! TEAM BOSS :

Getting there . All small damages repaired. Let’s get some fresh paint on this machine🤙🏼 Team Japan Auto Ifor Williams Norge

So many great memories from last years season hanging out with new and old friends from all over the world🤩 the Drifting community is the best! Here’s a shot from @dmiles_gmp shop prepping Chucky for @formulad Atlanta!

The Japanauto euro is out and ready for the upcoming season!😀 where should we bring this car this summer?👍

The supra with looks to kill! What do you think about Pro 2 driver, Ola Jaeger | Nexen Tire USA, new livery for Chucky? 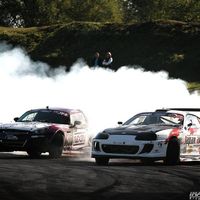 Here is our recap from the last round of Formula drift at Irwindale. We managed to get 4th place in the the pro2 Championship this year end earned our Pro 1 licence!

Thanks to my team Magnus Aarflot, Thomas H. Arntsen and Arild Furuli for all the hard work thru out the season! You guys rock!

We have a lot of great sponsors that belives in us and we would never be here without you, so thank you for being part of my program!

Check out our recap from Formula Drift St.Louis.

WE WON!! we managed to pull off first place here at Formula Drift Atlanta 2018! With a lot of upgrades to chucky ( the car ) and a somewhat rusty driver, we had some challenges to face coming into Round one. We had some small hickups wich was easily fixed and with very good help from Dan Burkett and his team we were very confident going into twin. The Wastegate got stuck halfway open during our last lap, but we just kept the pedal pinned and suddenly it came loose mid run! Maybe having a heavy foot isnt a bad thing. We took out all of the competition fair and square climbing up the ladder and this made us feel super strong going into finals. We managed to pull the longest straw during the final battle and we could not be more happy with the result! Thank you to my team Magnus Aarflot, Thomas Arntsen and Arild Furuli, all our sponsors, friends and family for making this possible, what a great start to the season!!! Bring on Round 2!

We`re in Texas for the final round of Formula drift Pro2 the upcoming weekend! Make sure to visit our stand at @raddan`s spot in the pit`s!

Yes! We qualified seventh!!
We got 79 points on our first run.
In the second run we got clutch problems, and a zero.

In Top 16 we'll be up against D. Brockway who qualified 10th.
Watch the Top 16 livestream at 03.00 Saturday morning Norwegian time.

Fredric Aasbø´s old Supra "Chucky" is back on track in Formula Drift, but this weekend in PRO2 with Ola Jæger behind the wheel. Fredric´s got some crazy memories from driving this legendary Supra.. :)

Fredric "The Hatchback Hammer" Aasbø loves to se old Chucky, the car that made him famous, back in the Formula D pits.
The actual owner of Chucky is Team Japan Auto back in Norway. A long time supporter of Norwegian drifting!

We’ll give you regular reports from Ola’s races in Formula D Pro 2.
The event in Orlando this weekend will be his debut in American drifting.
Here is his first report:

- Me and my team manager Thomas H. Arntsen flew over last Friday, which I think was smart considering jet lag. We live 15 minutes from the track and we snuck in there on Sunday to have a look.
- It’s a challenging track. Actually a bit smaller than I expected.

This is the first time Ola will drift on a banked track.
- The banked outside curve is a bit deeper than I expected. But the track is really wide there, which should help us make it through the turn ok.

Ola tries to be humble as there is a lot to learn. But says he won’t just drive safe all through the event.
- We’ll try to make some sick runs to get noticed!

The car, good old Chucky, is on its way from California.
- It’s trailered together with Dan Burketts Supra.
“Rad Dan” made his Pro 1 debut in Long Beach after having done Pro 2 in 2015 and -16.

- Just before they left the shop, Rad Industries fitted a new dogbox to Chucky.
This will make Ola able to do quicker and more aggressive gear changes than with the old regular ‘box.
- They tested it just outside the shop before they loaded the car on the trailer, and it worked fine.
- The car will arrive Tuesday evening. Tech inspection will be Wednesday evening and practice starts on Thursday.

Quali will be run later on Thursday. Top 16 finals starts Friday at 6.00 pm local time.
- There’s no top 32. Just 16 cars will make it to the elimination. I believe there will be around 30 entrants.
Ola's mechanics, Magnus Aarflot and Petter Vigen Andersen are on their way over from Norway right now. Rad Dan’s team will also be at hand. But their main focus will obviously be Dan Burketts own car.

Are you excited Ola?
- Yes, super excited! But not too nervous I think. Luckily I’m used to these kinds of challenges from my gokart days. If the car works ok I will drive ok!

(As far as we know there will be no driftstream from qualifying on Thursday. Please leave a comment if you know otherwise)

And don’t forget to watch the man who made Chucky a legend, Fredric Aasbø, in Pro 1!

wreckedmagazine.com Ola Jaeger hails from Norway and has taken Fredric Aasbo’s old MKIV Toyota Supra out of storage and is building it to run the Pro 2 series of Formula Drift. This could be an interesting new addition to the Pro 2 field that has lacked strong competition in years past. It will be interesting to see ho...

Vinyl & graphics company Auto-Sign has been with my team and I since the start with Team Japan Auto in 2008. Here are some of my favorite designs!

Ola Jaeger is out here at Gatebil in Fredric Aasbø Toyota Norge GT86X! Rumours are that Ola is looking to make a return in 2016 to do Drift Allstars running a full campaign ! Who wants to see the former Norwegian champion make his return to

Merry christmas and a happy new year to all of you!!!!

Check out the live stream of Formula Drift Motegi Racing at the GP of Long Beach TONIGHT. Livestream link: http://www.dailymotion.com/driftstream
Fredric Aasbø will be driving his old steed the JZ80 Supra.
We pulled her out of storage last week and threw some fresh red spray paint on the body and new Hankook USA tires.

Should be a fun throwback to his early Toyota days as a rookie.

Klikk her for å sende en melding til bedriften