Keshet Dance and Center for the Arts
4121 Cutler Ave NE

Triad will be at the Rocky Mountain Gun Show on July 28 and 29 at Expo NM. Stop by our booth and say hello! 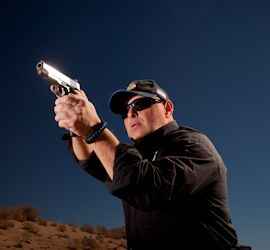 The April schedule has been posted. If you are looking for security guard certification courses or a concealed carry class call and register today. http://www.triaddefense.com/

What would it take to be an armed officer at a New Mexico school?

kob.com Three security guards, all with the Dulce Independent School District, have spent the last six days going through 50 hours of gun training funded by the district. 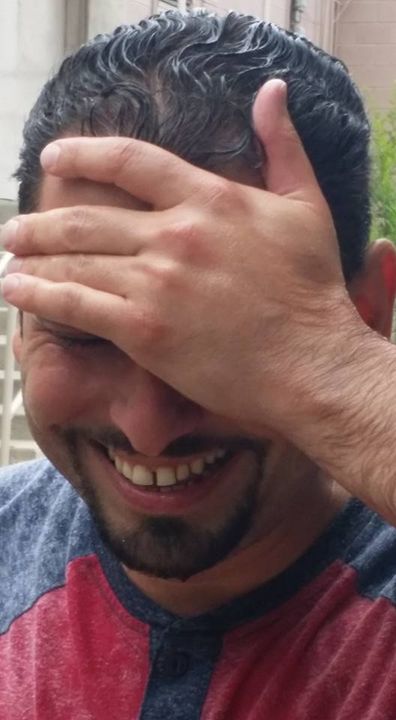 Sief Ali, came all the way from Texas to obtain his New Mexico Security Guard Level 2, 20-hour certification. He found the NM law enforcement standards more challenging than Texas requirements. He is looking forward to Level 3 training at the end of the month. Concealed carry on the horizon. He had never been pepper sprayed. Sief laughed amongst the tears. He should be proud of his efforts and accomplishments.

Just catching up on acknowledging the effort of all my clients in our last range class. Among the participants were concealed carry recertifications, security guard Level 3 recertifications, private contractor, retired LE, special ed teacher and a retired fire chief. Great job by my range assistants in helping keep things safe and on track. Man I cherish our 2nd amendment.

What a great group of dedicated professionals. Wonderful day of productive training at Founders Ranch. The best part - the range is only 8 minutes from our new and beautiful home.

So this is what the 30th of April at Founders Ranch was supposed to look like. Not 5 inches of snow. Sorry we had to reschedule today's Tactical Urban Pistol Course and CCW training. A heart felt thank you to all of my dedicated clients who were willing to reschedule for next week because of weather. Gives everyone that much more time to review your escalation of force standards, and do some focused dry-fire, prior to live fire. See everyone on the 7th!

Pop Quiz fun folks. So I offered to clean the gun of one of my range assistants, and what do you think I found? 1) gummed up extractor. 2) malfunction in the making. 3) poor gun hygiene. 4) archeological dig. 5) all of the above. Don't think our will happen again. 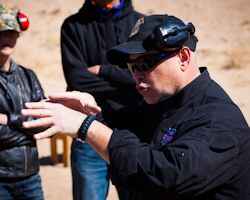 Do you want a chance to learn new tactical skills that will take your fi****ms training to a higher level? Do you want an opportunity to practice advanced skills? Triad Defense is offering its Tactical Urban Pistol Course on June 26. Call to sign up today!

triaddefense.com Tactical Urban Pistol Course (TUPC) was developed as adjunct training to the Triad Defense Concealed Carry Course. TUPC brings the serious concealed carry practitioner to a higher level of understanding, skill and appreciation for their art of self-defense and civil protection. The techniques taugh...

Triad has upcoming classes for all levels of security guard certification as well as concealed carry. Check our webpage for dates!

**All Concealed Carry and Level 3 Security Guard Training classes will be held on a private or semi-private basis for the month of February. Please Call David Brown, (505)814-2148, for details.

What are your thoughts?

foxnews.com An anti-gun lobby group has drawn the ire of second amendment supporters by going on social media and asking the public to call the cops on anyone open-carrying a gun.

What are your thoughts on this story?

www.abqjournal.com A former CNN reporter shot and killed a man who reportedly tried to break into the northwest Albuquerque motel room where he and his wife were staying Tuesday night. Chuck de Caro, who is married…

What are your thoughts on this story? http://www.nytimes.com/2015/06/12/us/judge-finds-probable-cause-to-charge-officers-in-tamir-rice-death.html

www.nytimes.com The judge, Ronald B. Adrine, also said he did not have the power to order the arrest of the two officers without a complaint being filed by a prosecutor.

Are you considering one of Triad Defense's Security Guard Certification classes? See what past students have to say about their experience: http://www.triaddefense.com/index.php?page=security-testimonials

Our Level 2 Security Guard Certification Class on Friday, 6/19 and Saturday 6/20 still has openings. Register today and take your career to the next level.

The Urban Awareness, Self-Defense Workshop will be taught on Saturday, June 27. In this full day class, learn proven, practical methods to keep yourself safe in a variety of situations.

triaddefense.com The Urban Awareness, Self-Defense Workshop (UASDW) is intended for the individual who does not have the time to dedicate themselves to years of martial arts training in order to learn self-defense. Not only will the student of UASDW develop the skills based on Startle Response Self-Defense principle…

contracostatimes.com Two people were shot and killed during a possible interrupted burglary attempt Friday night at a home that was the subject of a home-invasion robbery attempt earlier this week, police said.

msn.com A government teacher at the school, identified as Brady Olson, tackled the male student before more shots could be fired, and police took the teen into custody just before 8 a.m., authorities said. Nobody was hurt.

Just added: Level 2 Security Guard Training on the weekend of April 18 and 19

More classes have been added for April and May:
April 25 and 26: Level 3 and CCW
May 2 and 3: CCW
May 23 and 24: CCW
If you know anyone looking for a great class for certification or re-certification in CCW or Level 3 Security Guard please share.

Join us on April 12 for Close Quarters Tactical Pistol and take your fi****ms skills to the next level.

triaddefense.com This 8 hour course was developed for the practitioner of the fine art of fi****ms. CQPT is not a live fire training program. Instead it incorporates air soft equipment to simulate live fire. This course is intended for individuals who are serious about home security and personal survivability in t…

Thank you, Bryan, for the great testimonial!

"I recently attended the Level 2 Security Officer Certification class taught by David Brown, Special Projects Manager of Triad Defense, and I am truly impressed.
The class encompasses all of the elements necessary for a Security professional to expand both their knowledge and proficiency in their field. Beyond just the legal and technical aspects of carrying out the duties of Level 2, the course also provides the operator with the philosophy and principles that make the difference between “just doing the job” and knowing how to be a professional in the Security Industry.
The physical training: unarmed, handcuffing and baton use were excellent and provided me, as a student with both the ability and the confidence to successfully control any situation that might arise as a Security Officer.
I highly recommend to anyone in the Security field, either just starting or a Level 1 Officer looking to grow in the industry, TAKE THIS COURSE! "

To see more about what our clients think of us visit the "Testimonials" pages on our website. We have one for security guard classes and another for our fi****ms training:

triaddefense.com The instructors of Triad Defense are an absolutely phenomenal group! The Conceal Carry Course I took had participants ranging from having never shot a handgun before to only needing to renew their Conceal Carry License, and everywhere in between. The instructors were able to work with each individua… 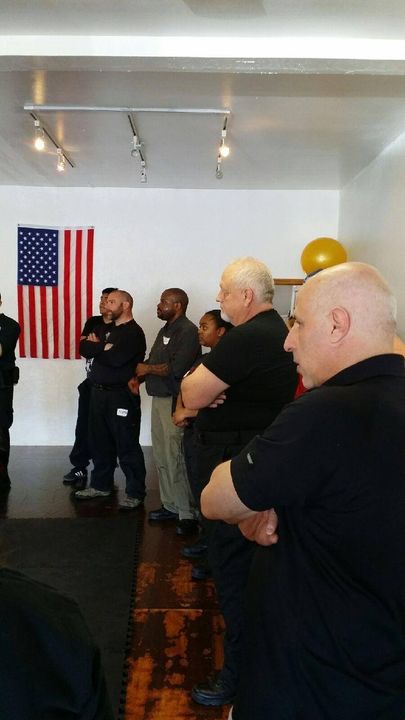 We had a great Level 2 class yesterday! Thank to you everyone who attended.

ruidosonews.com In the late hours of February 7, 2015, officers from the Ruidoso Police Department responded to a home off Sunny Slope Drive in Ruidoso to a residential burglary in progress.

Why cops don't 'shoot to injure'

www.policeone.com There are too many reasons why this isn't done. Here are a few.

Other Sport & Recreation in Albuquerque (show all)

TriSportCoaching offers comprehensive triathlon coaching in group training programs, clinics and in individual sessions. Our services cover training for specific events like an Ironman or a first time sprint distance, to sub-disciplines of each sport

October 16, 2022 - Albuquerque, NM Ranked as one of the Top 25 Marathons in the world, the Big 5 Sporting Goods Duke City Marathon is New Mexico's premier racing event and a Boston Marathon Qualifier.

Join WW Studio Albuquerque Coors and become inspired by people like you who are losing weight and creating healthier, happier lives . Visit our website for the latest time and address information.

Lifting Spirits around the World
Albuquerque

Provide an opportunity for the Balloonists in Albuquerque and around the World to say THANK YOU to the “front-line workers” that exhibited steadfast determination to help where help was needed. #liftingspirits #liftingspiritsaroundtheworld

If you want to play like a CHAMPION, learn from a CHAMPION. Coach Scott Peterson has 20+ years of successful experience in the NBA, college, and high school basketball.

Official page of the New Mexico Dressage Association, a GMO of the United States Dressage Federation. Contains show and clinic information, membership information, the newsletter, and links to other sites See less

Organized by ABQ JDRF Cycling Group but open to all... Cycling from Local Breweries on Tuesdays and Thursday Evenings. Locations and routes posted weekly. "B" Group rides 18-25 miles at 16-18mph, "C" group is only available on TUESDAYs at this point and r