This is only the beginning of a new season. Catch your Eagles this Saturday at Manzano HS as they take on the APS Duals Tournament starting at 9am!

Tonight is the night! The first home dual of the season is upon us! Come out and support Eldorado Wrestling as they take on Atrisco Heritage at 5:30 pm and Highland HS at 7:00 pm at Eldorado! Come support our wrestlers, hope to see you there!

Day one is in the books and out of the 12 Eagles that started the day only 6 are still in the tournament.
Gavin and Quinn are in the championship semifinals. Alex, Dom, Richard, and Pat are in the consolation quarter finals. The team is currently in 7th place.

We would like to wish our Seniors good luck this weekend. Our senior class includes four of our awesome managers. Thanks for all you do and Let's Go Eagles!

Let's go Eagles! Come out and support your Eagle wrestlers in the NMAA State Tournament! More information is in the post below!

The final event is here!!Eldorado qualified 12 wrestlers to compete in the 6A State Tournament which starts Friday morning and continues Saturday afternoon. You can follow the action on trackwrestling.com or watch it live at the Santa Anna Star Center.
Go Eagles!!!
GEWB!!!! 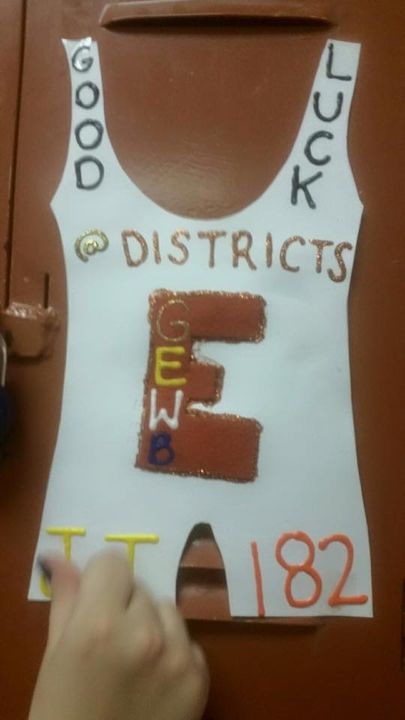 Your Eldorado Eagles are heading into the home stretch and the final two events are here. The District tournament is Saturday at Highland High School and only the top 3 in each weight division compete in the State Tournament next Friday at the Santa Ana Star Center.
Go Eagles!!!!!

It's Time!!!!
The 2015 Metro Wrestling Tournament is here!!! Come support the Eldorado Eagles as we host the best teams in the Albuquerque area!!!
Wrestling starts at 5pm on Friday and 9:30am on Saturday. Finals are set to start at 6pm on Saturday.
Go Eagles!!!!

Come support the Eagles tomorrow in their last home dual of the season versus Sandia HS. JV starts the action off at 5:30 with the Varsity squad presenting Senior Night at 7:00!

Hello Wrestling Families -
I hope everyone has had a wonderful holiday with their families!

Now It's time to get ready for the heart of the wrestling season.

The boys will have practice twice a day this week, Monday-Saturday. They'll be lifting/conditioning from 10-11am and have wrestling practice from 4-6:30pm. All the wrestlers need to be at both practices each day this week.

Morning running will begin on January 7th at 6am.

Happy Thanksgiving from your Eldorado Eagle Wrestling family!!!
Go Eagles!!!
Good luck to our Brothers tomorrow and Beat those Rams!!!

The Eldorado Eagles Wrestling team was nominated by Coach Tyler Davy for the ALS ice bucket challenge and accepted. They challenge the Eldorado HS Baseball team!

Who would be interested in seeing some of those wonderful pictures from the 2014 season?! They'll be put in individual folders according to the wrestler!

End of Season Wrap-up
On Feb 15th, Eldorado took 2nd place in the District Wrestling Tournament and qualified 10 wrestlers for the State Tournament. The Eagles came away with four District Champions, Logan Gonzalez, Gavin Davy, Eathem Austin and Pat Wooton.
Academic All-District honors went to Dominic Fascitelli, Tommy Davis, Logan Gonzalez, and Kyle Givens for maintaining above a 3.5 GPA.
On Feb. 22nd, the Eagles took 8th in the NMAA 5A State Tournament with Logan Gonzalez placing 2nd, Gavin Davy 4th, Eathem Austin and Pat Wooton both placing 5th.
We are very proud of the effort and commitment of our team this year, especially our Seniors.
Go Eagles!

Eldorado Wrestling would like to say thank you to our parents, staff, students, alumni and sponsors that made the 2014 Metro Tournament the best tournament of the season. Their hard work and generosity was appreciated by all the participants, coaches and the APS administration. The Metro Tournament was a First Class production that will be hard to follow. The success of the tournament was due to the community support and is the reason why Eldorado is considered one of the best High Schools in the country.
So proud to be an Eagle and so proud to be associated with Eldorado Wrestling!

The Varsity Eagles are soaring after last weekend’s 3rd place finish at the Albuquerque Academy Invitational and are heading into Viking territory tonight as they take on Valley at 7pm.

The JV Eagles will be hosting a home dual against, our district rival, the Manzano Monarchs at Eldorado at 6pm.

See you there and Go Eagles!

Come support our Eagles as the Varsity competes at the Albuquerque Academy Tournament Saturday January 11, 2014 at 8:00am and the Junior Varsity heads to the Del Norte Open Saturday also at 8:00am.
Go Eagles

Wednesday’s Senior Night was a big success thanks to all the parents for your support for in honoring a great group of young men. They are an excellent representation of what Eldorado Wrestling is all about they are truly First Class, All the Way on and off the mat!
Anthony, Clint, Dylan, Eathem, Joey, Kyle, Logan, Mariano, and Tommy collectively hold a GPA of 3.74 and set a high standard for the young men that will follow in their footsteps. Keep up the good work and finish the season strong.

Come support our Eagles!!
Varsity will be at the APS Tournament at La Cueva High School starting Friday at 5pm and Saturday at 8am.
JV will be at Albuquerque High for a mini dual tournament Friday starting at 4:30pm.
Good Luck Eagles!!

Eldorado split last night’s quad dual with a victory over Manzano 40-29 and a loss to Rio Grande 48-28. It was a solid performance by the Eagles coming off a 3rd place finish at the Los Lunas Duals and they improve their dual meet record to 6-2 this season. The next test for the Eagles is the APS Invitational on Dec 20-21 at La Cueva High School.

Hey Sports Fans, come support our Varsity team Tuesday night at Eldorado High School as they take on NM Co-State Champion Rio Grande Ravens and District rival Manzano Monarchs. This will be a quad meet with the Valley Vikings come see some of the best wrestling Albuquerque has to offer. The first dual starts at 5:30pm and the second starts at 7:30pm.

Official page We are a fabulous year-round swimming and water polo team based in Albuquerque. We have a long, rich history in New Mexico, including training some of the country's most successful athletes!