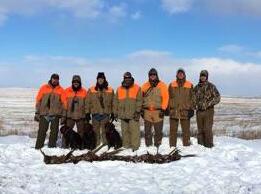 Great time in South Dakota last week! Awesome dog work and great shooting yielded 90 pheasant out of a possible 105. Best ytd for our group. Thanks to everyone who braved the blizzard and sub zero temps!

Congratulations to the new Highview's puppy owners! Enjoy your new companion and I hope to see many pictures of them in the future.

Puppies are all sold. Good times today, Jake ran as test dog at Central Michigan HRC's finished test. Jake hasn't trained in about a year and a half, but after clearing some cobwebs out of his couch potato retirement he showed that he was up to the task by doing very well. I wish he was a couple years younger again! I miss running him in hunt tests, we are a great team!

They are here! 5 males and 3 females. Sugar and all pups are doing great. 3 males and 2 females still available.

yahoo.com A new welcome to Yahoo. The new Yahoo experience makes it easier to discover the news and information that you care about most. It's the web ordered for you.

Well, the start of the hunt test season is upon us and we'll be headed for Fenwick,MI this weekend to run Jake and Sugar in Finished. Great Lakes HRC always hosts a great test with awesome grounds and ALWAYS challenging hunt tests especially in the finished level. I look forward to the challenge and hope that the Highview dogs show their stuff!

Great training today. Pattern blinds, water blinds, pile work. Also was able to get a client dog(8mo) to start running into the water. 2 weeks ago she wouldn't even go in up to her chest and today was retrieving 60yrd marks in the pond! Glad to see young dogs gain confidence.

Looking forward to training with Central Michigan HRC in the am. Great people and talented retrievers. Who's dog in the club do you think is the fastest? Chris Fountain thinks Rebel is but she'll have to race her brother Rocky to earn that title;-)

The first female pup went to her new home this morning. The wife and kids will miss her but she is going to a nice HUNTING family hence the new name "Coot". Enjoy your new pup Justin Gafford

Busy hunt test season this year. I've decided to run more tests this year than in the previous ones to try to give Jake a chance to reach 500 lifetime UKC Points. Rocky will be running seasoned to earn his Hunting Retriever title and Sugar will be doing as she always does, being a pleasure to run and passing tests! Wish us luck and share our status with your FB friends.

Another client on the force fetch table.

All the puppies are SOLD! 5 1/2 weeks until they go to their new families.

Awesome Sunday! 165 bird tower hunt and our group shot 139 and found another 20 on the walkup hunt!! Best percentage I've ever been a part of and a great group of guys. Thanks to all but especially the dog handlers: Mike Wall, Kyle Wrobleski, Gary Whitcomb, Sean Barton, and Mike Boufford.

1 female and 1 male pups left. Don't wait too long to get your deposit in or you might miss out on one helluva nice puppy.

Growing like weeds! 3 females are 3ozs heavier than the others, what little piggys lol.

Sugar and her babies.

Puppies on the ground! Sugar whelped 6 pups this morning 4 females and 2 males. 3 females spoken for and 3 other potential owners are thinking about the pups. First come first served so don't delay get yourself a Highviews pup today!!

3 deposits are in for Jake X Sugar pups. Sugar is doing great and gettin' HUGE! We expect 6 pups like the last litter so if you've expressed interest or said you want a pup, get your deposit in ASAP. First come, first served.

Great weekend for the Highview crew. Jake ran a 300 bird tower hunt at Dunn Creek Outfitters Saturday and Jake, Sugar, Rocky, and Chloee worked their tails off Sunday on a 100 bird tower hunt followed by a walk up at G&L Gamebirds.

Merry Christmas and happy new year from our Highview's family to all of yours!!

Successful duck hunt in Canada yesterday. 3 black ducks, 8 mallards, 2 gadwall, and a nice drake shoveler my buddy is going to have mounted. Oh, and my first duck band!!

Black lab pups due in February out of HRCH Highview's Hopeful Jake X HRCH UH Highview's Sugar Coded Blue Sky. This is a repeat breeding due to the quality of the previous litter. Six pups that are one year old now all went to hunting and hunt test homes. Out of the six three have earned their SHR (started hunting retriever) title and reports from all the owners are that the pups show tons of drive, birdiness, are very biddable, great noses, high intelligence and awesome pets as well as hunters. I know first hand what they mean because I kept a male and he has been very easy to train. Check out my website for health clearances and pics. I'm asking $600 per pup $500 if going to a hunt test/trial home. Taking deposits after the holidays.

Announcing the repeat breeding of Jake and Sugar. The first litter of pups out of those two are nothing short of talented hunting retrievers. All 6 of the pups went to hunting homes and 3 of the pups earned their SHR (Started Hunting Retriever) titles through the HRC/UKC at very young ages! We are expecting to have 6 again hopefully and already have 2 females spoken for. Let me know ASAP if you or someone you know is interested. Discounts to hunt test homes.

A great day to work the dogs. 23 out of 26 birds taken with Jake and his boy Rocky. The Rock star started to figure out the hunting part of the upland towards the end of the day and actually put up a couple birds on his own. Very proud of those two hunting maniacs!

A very good day for Highview's. 400 bird European hunt at Dunn Creek in Laingsburg,MI today with Jake and Sugar. First time out for Jake since August 2011 because of two knee surgeries, but he did well and didn't show any signs of pain in his knees!!! He is lounging on the couch and nursing some cuts and scratches but all in all he passed the test today. It's nice to have my hunting buddy back in the swing of things again! Charity hunt at Variety Farms in Hartland,MI next Sunday hope to see everyone there.

Yellow dog with a nice northern Michigan grouse. A nice finish before firearm deer season in the morning.

Yellow dog with a nice northern Michigan grouse. A nice finish before firearm deer season in the morning.

Purposeful Living is a Life Consulting Co. for women wanting to rise above the noise of others and live from a space of authenticity, abundance and purpose

A Foundation for the youth of America, that will target the under-privileged inner city and small town youth.

Phizeek Fitness conveniently serving as a one stop shop for all of your fitness needs.

XPA is a sports performance training system to take athleticism to the next level in an efficient, safe manner.

Ages 55 or better are welcome to visit weekdays for Chair Exercise, Bunco, Cards, Chair Volleyball, Billiards, Yoga, Bingo, Italian Club and more! Free to join, no city limits! THIS IS NOT A CITY RUN OR SPONSORED PAGE - seniors post to page.

F3 Fitness is a place where people achieve greatness through physical fitness! Plain and simple we build NINJA'S!