The location of Dodger Art Store is just 5 minutes from the Dodger Stadium.

Instant Classic: Dodgers Eliminate Rival Giants 2-1 in Epic Game 5 of NLDS Cody Bellinger knocked in the go-ahead run in the ninth inning, lifting the Los Angeles Dodgers past the rival San Francisco Giants 2-1 in an epic Game 5 of the National League Division Series on Thursday night.

President Joe Biden welcomed the Los Angeles Dodgers to the White House today to celebrate their 2020 World Series win with a cheerful ceremony that represented a stark departure from the heavily politicized gatherings of professional sports teams under former President Trump. https://politi.co/366IvGM

Former Dodgers HOF manager Lasorda dies at 93 Hall of Fame manager Tommy Lasorda has died at the age of 93 after suffering a sudden cardiopulmonary arrest at his home Thursday night.

In 1981, an Unknown Pitcher from Mexico Changed the Game for the Dodgers

In 1981, an Unknown Pitcher from Mexico Changed the Game for the Dodgers A look back at the championship season when "Fernandomania" swept L.A.

On October 4th, the Brooklyn Dodgers beat the New York Yankees 2-0 in Game 7 of the 1955 World Series #brooklyndodgers

How a bobblehead honoring Dodgers fan Hiccups the Clown pays it forward in L.A.

How a bobblehead honoring Dodgers fan Hiccups the Clown pays it forward in L.A. In celebration of National Bobblehead Day, a preschool teacher from Silver Lake and busy humanitarian “Hiccups The Clown,” is honored with his second comical, nodding figurine. 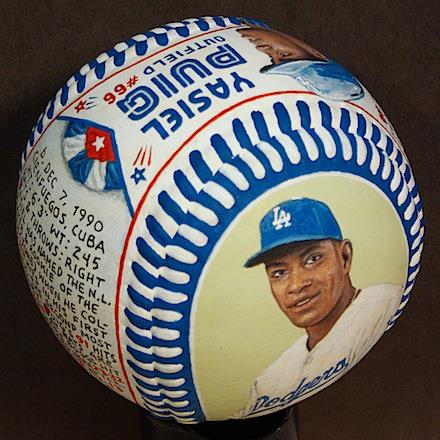 The Boys in Blue are adding to the history books these days...No other team has such a rich history. We sell cool Books about the Dodgers! #losangeles #ladodgers #lahistory
http://dodgerart.com/products-page/books/brooklyn-dodgers-in-cuba/

dodgerart.com Sandy Koufax. Don Drysdale. Maury Wills. Steve Garvey. Don Sutton. Fernando Valenzuela. Tommy Lasorda. Shawn Green. Eric Gagne. Since 1958, names like these have made the Los Angeles Dodgers into one of baseball's most successful and envied teams. Over the years, the team has won an astonishing nine...

We have some specials up on Yelp Page. Come and get some Dodger ART #ladodgers #thinkblue #baseball #la

All this in less than a week?!

Just Jess from the Midwest and your new FightCamp trainer!

Live Happy. Live Healthy. On a mission to help people find the happiest and healthiest versions of themselves.

Want to get in the best shape of your life??? Well we are the one's to help you get there!

Dance Studio Showtime–Katusha was founded by its director, Larisa Carlson; children's non-profit organization with Russian roots. Many of our programs are aimed at preserving the beautiful Russian heritage given to the world through the performing arts

Pin-Up Golf is a company dedicated to professional fundraising for charity golf tournaments. Our mis

Whole Body Gallery by Nigel Sampson. Pilates, Health and Healing Programs designed to express your most radiant self.