Equipment rental and sales and a full stringing service also!

What do these guys have in common? They've absolutely dominated the competition over their careers. Their career point win percentage....55% 😳. Tennis players are always looking for the perfect shot, game or match but you don't have to be perfect to dominate. Last year Novak Djokovic had one of the greatest tennis seasons of all time. He won 56% of all the points he played. A reminder. 55% is DOMINATION! 🎾🏆

RDC Drill. Lateral movement and hands. Working with hank on his netplay. A great strength for him are his volleys and finishing around the net so this is one of our favorite drills to keep his net game sharp. Footwork around the ball and being able to hit a moving target are key.

Yesterday Hannah Quirk and I worked on a number of first strike tactics for Serve and return. Around 70% of all the points in tennis end within the first 4 shots and while you certainly need to have stroke tolerance and rallying ability to play great tennis, this (0-4) rally length needs some serious attention. Hannah's got a head start with that big lefty forehand.

Goals:
1) Return the ball deep down the middle to reduce errors and angle for your opponent.
2) Look to use the forehand to dictate the point from a short reply.

*Short backswing are key on the return and great footwork to upgrade to offensive shots on the 4th ball. 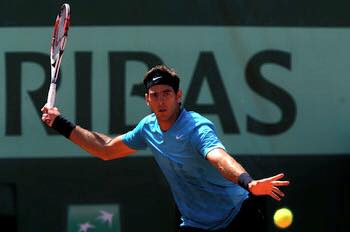 Courage on the court

Courage on the court

ausapproach.wordpress.com It takes courage to become a great tennis player. In fact it takes courage to become even a decent player. Whether you are a stone cold beginner or a top 10 pro, every player knows what it feels like to be afraid to fail. To be afraid to lose a match, afraid to lose your sponsors, afraid of embarrassing yourself in a group clinic, afraid to hit the ball over the fence attempting topspin or even of missing the ball completely. [ 721 more words. ]

Top 10 things every player should have in their tennis bag
https://ausapproach.wordpress.com

How to execute: THE POACH

How to execute: THE POACH

How to play: THE MOONBALL

How to play: THE MOONBALL

Federer or Nadal? Who is the Greatest of All Time?

ausapproach.wordpress.com Recently here at the coronado tennis centre myself and one of the other pros, have been having a discussion on who we think deserves the title as the greatest mens tennis player of all time. While it is always an interesting but sometimes futile process, we enjoy the occasional tennis banter so we do it anyway. Before i delve into this debate a little bit further i would like to point out that I believe strongly that both of these guy are absolutely amazing athletes who are at the current time, playing some of the most amazing tennis that has ever been seen. [ 1358 more words. ]

ausapproach.wordpress.com Both elite players and club players understand the importance of planning for their matches. Scheduling practices, fitness sessions, coaching sessions, equipment and pre match warm-ups are the obvious parts of tournament/match preparation. But what often… [ 277 more words. ]

First Coronado Adult Summer Camp was a huge success. Don't miss the next one in August!

How to stop double faulting

ausapproach.wordpress.com There are few things in tennis as belittling as not being able to start a point because you cannot serve the ball into that giant service box on the other side of the net. From top touring pros to beginners starting matchplay, the dreaded double fault is… [ 565 more words. ]

ausapproach.wordpress.com (Pete Sampras: Fastest Serve 216 km/h 135 mph) What would you say is the most key element in serve power? The forward toss? Strong wrist snap? Leg drive? As a junior player I had the great fortune to be able to train at many leading tennis academies and… [ 515 more words. ]

ausapproach.wordpress.com Pat Rafter was one of the greatest serve and volley athletes in history. A vicious kick serve and a crushing net game took him No.1 in the world and back to back US.Open Championships. So what can the average club player learn from Rafter? Providing you… [ 448 more words. ]

Rituals & Scripts. How they can help you win!

ausapproach.wordpress.com Rituals Successful players across all sports use rituals and scripts to gain a competitive edge over their opponents and control themselves during the heat of battle. There are two main types of rituals, Pre-Game rituals and In-Game rituals. In game… [ 928 more words. ]

Check out the new video tips on the website. 1st video focuses on using the Non-racquet hand
http://www.downtowntennis-sandiego.com/#!tennis-tips/chfs

Don't be idle after your serve!
www.ausapproach.wordpress.com

Doubles Strategy: 2 back on return

What you need to know about your stance!

A great view on the game by one if the greatest to ever play it!

coronado.ca.us The Official Government Website of the City of Coronado, California

[05/20/13]   Would like to announce the hiring of Tennis Pro Brittany Augustine. Brittany achieved a WTA singles ranking of 498 and WTA doubles ranking of 276. Very excited to have her on board! The San Diego Duathlon is scheduled for NOV 10th 2013! This is to everyone who loves getting fit and healthy. This fitness gym is open to all who wants to have a fit body. San Diego Velodrome is committed to providing our members with great racing, adult/junior classes, coaching, and most importantly FUN!!