RE:RUN is where the street meets the track, in a live sporting event that combines a 5k road race with a premier track meet. Join us in San Diego on May 5, 2013! 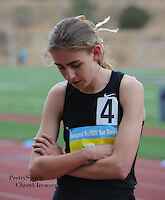 ElliptiGO Mile was a huge success on the track! Check out the blazing times from our competitors. Congratulations to Rusty and Betsey for setting new marks for the ElliptiGO mile!

Results are posted for the Inaugural Re:RUN San Diego! Three new stadium records set today! A new standard was set for Track & Field in San Diego. Thank you everyone for coming and stay tuned all week as we will be posting a bunch of pictures and stories from Re:RUN San Diego.

rerunsandiego.com Join us on May 5, 2013 for a great 5k/10k race, then watch a premium US track and field meet in historic Balboa Stadium in San Diego, California.

[05/04/13]   Pre-registration closes at 5PM today! Race Day registration and Packet pick-up will open at 6AM tomorrow morning. Re:RUN weekend is here. Looking forward to seeing everyone out at Balboa Stadium tomorrow! 5k kicks off at 7:30am and the track meet begins at 10am. 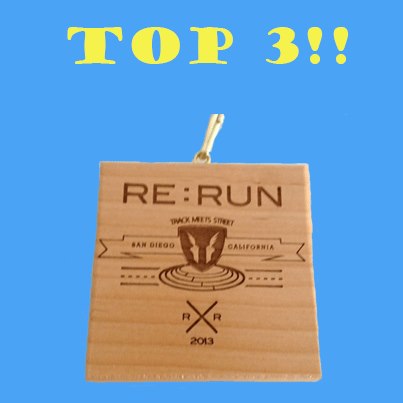 Re:RUN San Diego wooden engraved awards are in! Top 3 finishers in each age group will grab the award! Don't miss your shot at taking home a sweet award. Race Day registration opens at 6AM this Sunday. 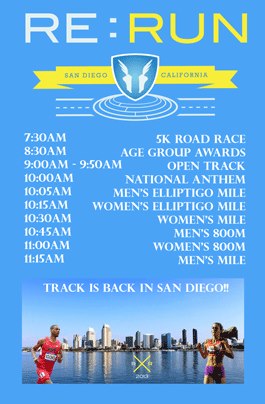 Re:RUN is scheduled and ready to go!! Race Day registration begins at 6AM and will close at 7AM. Track is back in San Diego at Balboa Stadium this Sunday!! 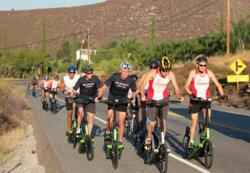 Ready for the first ever ElliptiGO Mile?!? We certainly are! Don't miss out this Sunday to be part of history at the Inaugural Re:RUN San Diego! 5k starts at 7:30am and the Invitational track meet starts at 10am! See everyone this Sunday at Balboa Stadium.

prweb.com Four elite runners will race ElliptiGOs one mile on the track for a $2,000 purse

Less than one week till the inaugural Re:RUN San Diego! Show your pride as a Re:RUN Road Warrior and change your profile picture to our logo!

ONE WEEK!! The Inaugural Re:RUN San Diego is only one week away. Don't miss being part of history! Packet Pick-Up is scheduled for this Friday at Road Runner Sports! Registration Open here:

active.com Re:RUN welcomes you to the newest wave of running events. For the first time, experience a live sporting event that combines a 5k road race with a premier track

Re:RUN San Diego is Boston Strong! We will donate 50% of all registration fees directly to the victims affected by the tragedy in Boston. We are all one running community! How much can we raise for Boston, San Diego? Register @ http://www.active.com/5k-race/san-diego-ca/rerun-san-diego-2013

The Men's Mile field is set for the Inaugural Re:RUN San Diego! Jim Ryun's Stadium record has stood since 1965! Could the days be numbered? Oddly enough these 12 Milers average PR's come out to 3:55.3! Could that be a sign!! Only 12 days left till Re:RUN San Diego. Don't miss your chance to be a part of history.

We have a winner in the contest!!! Congratulations Justin Wolfe on winning a free entry into the inaugural Re:RUN San Diego!!

Re:RUN is 2-weeks from tomorrow! Don't miss you chance to watch Olympians in San Diego! Registration is open here: 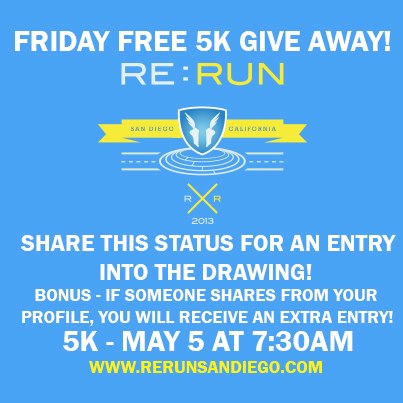 We are raffling off one FREE entry into the Inaugural Re:RUN San Diego 5k! Share this status for an entry into the drawing. If someone shares the status from your page you will receive an EXTRA entry and they will receive an entry as well. Entries via SHARING are open until midnight PST. We will draw the winner tomorrow, Saturday, April 20. Good Luck everyone!!

BONUS - For every 25 total SHARES we will draw an EXTRA FREE 5k winner! Get sharing!

Balboa Stadium Records have been discovered! Re:RUN San Diego will set the mark for the Women's Mile stadium record and will take a serious run at the other three records on the board!

Jim Ryun's famous HS record still holds as the stadium record 48 years later!! Can one of the Re:RUN Milers take out the famous record? Be there to find out on May 5! 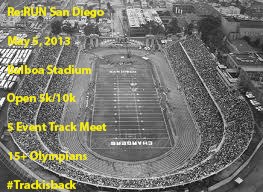 Track is back in San Diego!

[04/15/13]   Thoughts and prayers go out to everyone in Boston and individuals with friends & family in Boston. Please stay safe.

2012 Olympian Lynsey Sharp's profile is up on Re:RUN San Diego's official webpage. Learn more about Lynsey as she will be competing in the Women's 800m on May 5 at Balboa Stadium.

rerunsandiego.com Join us on May 5, 2013 for a great 5k/10k race, then watch a premium US track and field meet in historic Balboa Stadium in San Diego, California.

[04/10/13]   Re:RUN San Diego's Women's 800m field is finalized and the guys field better watch out because this field is blazing as well!!! Olympians, USA Champs, USA Trials Finalists galore in this field!!

Ever wanted to throw the ball at Qualcomm Stadium before the Chargers took the field or shoot some hoops at Staples Center before the Lakers take the court? Well for the first time you will have the opportunity to play on the same field as the professional!

Re:RUN San Diego will host an open track from 8:45am - 9:30am to give everyone a chance to test there skills at any distance you choose! See how long you can run 4 minute mile pace before the pros take the track for their races or see how fast you can run one lap against a friend!

What distance will challenge yourself or a friend in during the open track period at Re:RUN San Diego on May 5?

[04/05/13]   Re:RUN San Diego is only 1 month away!! Amazing athletes are coming out to the inaugural race to showcase their talents right here in San Diego. Which athlete are you most excited to see?

Re:RUN San Diego is proud to feature the very first track-based ElliptiGO race: The Men's and Women's ElliptiGO Mile. Come see Mary Decker Slaney's return to the track and watch her "run" faster than ever on May 5 at Balboa Stadium!

Confirmed Re:RUN San Diego International athletes had a great day at the Queen Street Mile in Auckland as Susan Kuijken and Zoe Buckman went 1-2 in 4:17.18 and 4:17.67 in the Women's Mile! On the Men's side Ryan Gregson took down the Men's Mile cracking the 3:50 mark! Don't miss your chance to see these 3 athletes compete in San Diego on May 5.

Re:RUN San Diego athletes topped the podium this weekend in Auckland, New Zealand! Ryan Gregson and Susan Kuijken took home the Men's and Women's Mile chamionship. Don't miss your chance to see these two athletes in San Diego on May 5!

athletics.com.au Australian Ryan Gregson has raced to victory in the Queens Street Golden Mile in Auckland, winning the event in 3 minutes 48.58 seconds on the mostly downhill course Gregson ran much of the race through the heart of Auckland on the shoulder of fellow Australian Collis Birmingham before moving ahead… 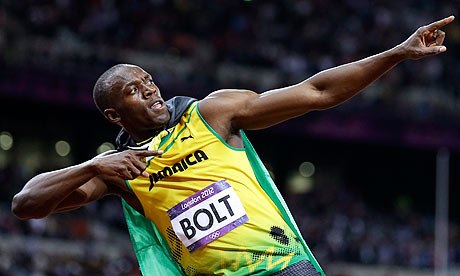 Big Re:RUN news this morning!! World Record holder in the 100m and 200m, Usain Bolt, has decided to give up on sprints and focus on distance running! Usain is such a fan of the city of San Diego he wants to make his 2-Mile debut at Re:RUN San Diego on May 5 at Balboa Stadium!!

It's a beautiful day in San Diego today. It is 70 and sunny! What is everyone doing for their workout today?

The first person to correctly name the athlete who finished 2nd to Steve Scott, in the mile, at the 1988 Michelob Games at Balboa Stadium AND what was that athletes time, wins a free 5k entry!

Registration is open on Active! 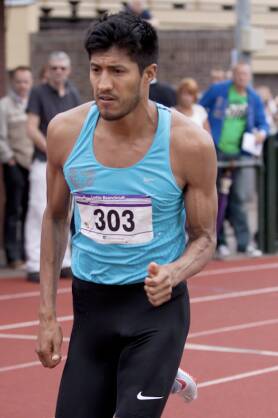 Pablo Solares the Mexican National Record Holder in the 800m, 1500m and Mile (indoors) will attempt to break the Mexican 1 Mile National Record of 3:58.1. Pablo has run 3:54.5 on the indoor track!! Don't miss your chance on May 5 to witness a potentially record setting day in San Diego!

Re:RUN San Diego 5k and 10k runners will get a beautiful view of downtown San Diego during their race on May 5! Nothing better then beautiful views while you race towards your next personal best! 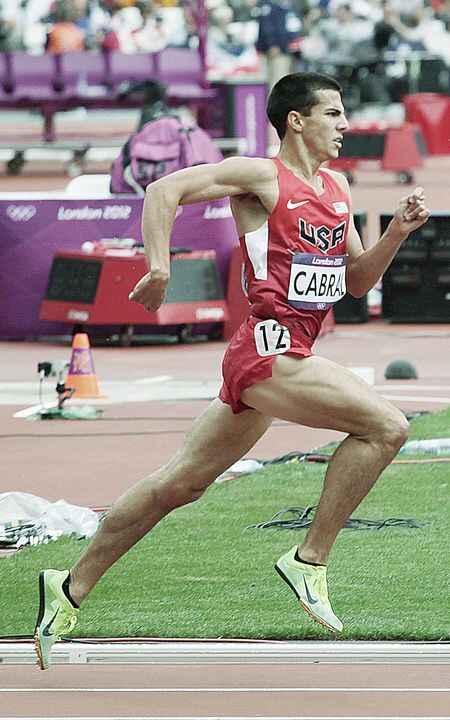 Re:RUN San Diego is proud to announce another member of the USA Olympic Team in London has committed to compete in the Men's 2-Mile event. Donn Cabral won the 2012 NCAA Championship in the steeplechase and rode that momentum all the way to 8th place in the Olympic Final for the steeplechase. We are excited to have him here in San Diego. Don't forget to register on active.com for your chance to run and see athletes like Donn compete!

Get inside the creation of Re:RUN San Diego with this Q/A between Runnerspace's Scott Bush and Re:RUN Meet Director Pete Hess.

runnerspace.com Every so often an individual (or two) start a new track and field meet that captures the sport's attention. In 2013, that meet is Re:RUN San Diego. Former University of Maryland runner Pete Hess and James Kehaya are putting on the new event, which is two road races with a professional track meet at…

Breathtaking views of Downtown SD as you run through Golden Hill Community Park - there's no better way to spend your Sunday morning! Join us on May 5 for the inaugural Re:RUN San Diego 5k/10k, register today!

http://www.active.com/10k-race/san-diego-ca/rerun-... Re:RUN welcomes you to the newest wave of running events. For the first time, experience a live sporting event that combines a 5k & 10k race with a prem Sunshine Little League was established in 1956. Tecolote is the best youth baseball program in San Diego. Serving kids ages 4+ we offer a great community, great coaching and an experience of a lifetime. Tecolotebaseball.org