Northrop Grumman Presents Battle on the Midway On Friday, November 9th, a historic and unprecedented celebration will take place on the flight deck of the USS Midway Aircraft Carrier in San Diego Harbor.

The Inaugural Northrop Grumman Presents Battle on the Midway, a Division 1 NCAA Men's Basketball Game, will feature two-time National Champion Syracuse University, led by Hall of Fame Coach Jim Boeheim. The Orange will be matched against the Aztecs of San Diego State University and Coach Steve Fisher, winner of 4 Mountain West Conference Championships, in what will be their first game of the NCAA

season. The game will be aired on a national television network via Fox Sports. The contest will be played in front of a live crowd of 4,000. Please contact us to become a part of this Extraordinary Event:

Remember this incredible event with merchandise from http://www.midwaymerchandise.com/ Check out photos from yesterdays game!

Here are some quick snapshots of the basketball court being built on the flight deck. What a sight! Tip off is less than three days away! Here is a link to a time lapse of the court being constructed: http://www.midway.org/live

And remember, due to the museum closure on Sunday the 11th, the Midway will offer free admission to veterans on both Saturday the 10th and Monday the 12th!

GET YOUR MERCHANDISE NOW FOR THIS ONE-OF-A-KIND EVENT!!!!

GET YOUR MERCHANDISE NOW FOR THIS ONE-OF-A-KIND EVENT!!!!

Battle on the Midway Moved to Sunday

Attention: Due to the threat of inclement weather, Northrop Grumman present Battle on the Midway has been moved to Sunday. Tip is set for 1:00 PM

goaztecs.cstv.com Northrop Grumman Presents Battle on the Midway, which features No. 9 Syracuse and No. 20 San Diego State, has been moved to Sunday, Nov. 11. The game will remain on the flight deck of the USS Midway Museum with tip time set for 1 p.m. PT.

Please contact us to become a part of this Extraordinary Event:

Hertz is proud to be an Official Sponsor of Northrop Grumman presents Battle on the Midway as part of its Hertz for Heroes campaign which honors and thanks U.S. servicemen and servicewomen returning home.

For more about Hertz for Heroes, visit:

hertz.com User ID is a unique ID that you can create in order to login to Hertz.com. This is an optional field that can be used in place of your member number that you will receive once you complete the enrollment process.

Check out the Battle on the Midway Coaching Clinic!

On the 8th of November on the USS Midway:An amazing basketball clinics with Jim Boeheim, Steve Fisher, Don Casey, Michael Cage, Reggie Theus and others. Special thanks to Don Casey in making this happen. Register today: http://bit.ly/TYRxqM 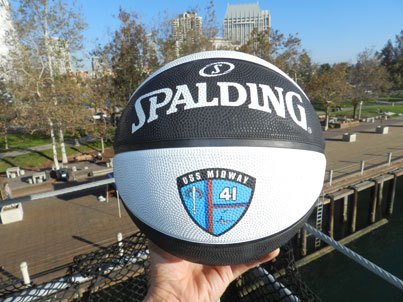 One Week to Go for the Big Game!

Have you caught NCAA Basketball Fever yet? The Jet Shop, the gift shop on board the museum, sure has!

For a limited time, the Jet Shop is selling regulation-sized Midway basketballs for $19.99! You can also order a ball over the phone or online at:
http://jetshop.midway.org/

The Hertz Corporation (NYSE:HTZ) continues honoring the nation's military through "Hertz for Heroes" and announces its commitment to donate a portion of each car rental reservation booked on Hertz.com from November 11 through November 12, 2012 and a portion of every equipment rental contract opened between November 1 and November 11, 2012 to DAV. In addition, Hertz has been named the Official Sponsor of the inaugural Battle On The Midway, with NCAA team San Diego State University taking on Syracuse University aboard the USS Midway aircraft carrier on November 9, 2012.

Check out a live we**am from the Flight Deck!!!

“Northrop Grumman Presents Battle on the Midway” will feature San Diego State University and Syracuse University.
The game is set for a 5 p.m. Pacific-time start and will be televised nationally by FOX Sports Net. The Fox broadcast team for “Battle on the Midway” will be Hall of Fame broadcaster Dick Enberg, five-time NBA champion Steve Kerr, Erin Andrews and Mike Pomeranz.
As part of their sponsorship, Northrop Grumman will be offering a limited number of complimentary tickets to the military and veterans.

“Our country’s active military, reservists and veterans have committed to preserving the freedoms we enjoy – sitting outdoors in beautiful San Diego and enjoying a college basketball game aboard the U.S.S. Midway Museum is a reminder of just how fortunate we are,” said Jim Zortman, Northrop Grumman sector vice president and San Diego site manager. “‘Battle on the Midway’ will provide a unique and memorable experience to honor our country’s veterans and we’re proud to be a part of what promises to be a great event.”

San Diego State University comes off a 26-8 season and is the reigning Mountain West Conference champions. Syracuse University, champions of the Big East regular season, finished its season at 34-3 and reached the Elite 8 in last season’s NCAA tournament.

For further information on the “Northrop Grumman Presents Battle on the Midway,” please visit the event website at www.battleonthemidway.com or contact Rick Schloss at 619-708-6007 or via email at [email protected].
Northrop Grumman is a leading global security company providing innovative systems, products and solutions in unmanned systems, cybersecurity, C4ISR, and logistics and modernization to government and commercial customers worldwide. Please visit www.northropgrumman.com for more information.

Battle on the Midway

hub.video.msn.com San Diego State and Syracuse begin their seasons atop the deck of the historic USS Midway, November 9th.

Battle on the Midway! Nov. 9th

For the first time ever, the USS Midway Museum will be the site of a major college basketball game, between highly regarded San Diego State University and Sy...

Tickets are now available for the Battle on the Midway!!!

Battle On The Midway Tickets On Sale Wednesday

goaztecs.cstv.com Tickets for the Battle on the Midway, the season-opening game between Syracuse and San Diego State on the USS Midway, will go on sale to the public on Wednesday, Oct. 10, at 9 a.m. PT.

goaztecs.cstv.com Sporting News Magazine has San Diego State at No. 19 in its preseason top-25 poll, which is the top ranking in the Mountain West, and has projected it to win the MW in 2012-13.

Everyone, check out our Battle on the Midway Twitter page! Follow us for all the up-to-date info on the game!

twitter.com Instantly connect to what's most important to you. Follow your friends, experts, favorite celebrities, and breaking news.

espn.go.com 1. San Diego State averted a major scheduling crisis when it was announced its marquee matchup against Syracuse on Nov. 9 aboard the USS Midway was on

Battle of the Midway to proceed as planned

espn.go.com After a Thursday San Diego Union-Tribune report revealed this season's planned Battle on the Midway game between San Diego State and Syracuse to be in

SDSU-Syracuse Confirmed in Battle on the Midway

There has been an erroneous story issued by a reporter in the San Diego Press...With more erroneous stories published without basis by other news outlets.

The Battle on the Midway between Syracuse and San Diego State is ON, has never been cancelled and will air LIVE on Fox Sports as scheduled on November 9th, 2012 at 8PM ET.

Ticket information will be issued shortly and affordable prices for seats will be detailed in the upcoming days.

RE:RUN is where the street meets the track, in a live sporting event that combines a 5k road race with a premier track meet. Join us in San Diego on May 5, 2013! http://www.rerunsandiego.com/

THIS IS IT! THE HAWAIIAN MAYAN OFFICAL MMA TEAM PAGE!