This is is the official Facebook home of Vision Swim. Find out more at www.visionswim.com. Our club is a USS year round competitive swim team offering high quality professional coaching and technique instruction for all ages and abilities.

The mission of the Vision Swim program is to strengthen our community through the positive development of youth in competitive swim training and instruction. The program encourages development of the individual through goal setting, disciplined participation and performance improvement. Vision Swim participants strive to achieve a unified team, recognition as a quality program and the highest leve

l of achievement as they prepare for invitationals, Junior Olympics, Nationals and beyond. The Vision Swim program strives to maintain accessibility to the broadest possible segment of the community with very modest fees 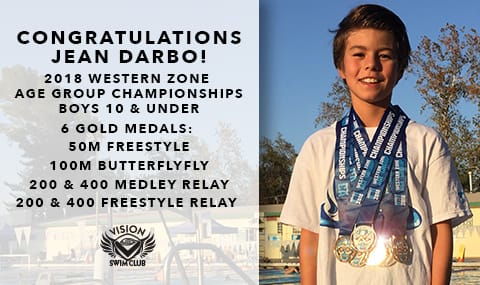 Jean Darbo went to Roseville, CA to represent Southern California Swim during the Western Zone Championship where more than 700 swimmers from 16 LSC teams and 13 states battled in the water for full four days.
Also as expected, Vision Swimmer Jean Darbo came back to his home with some hardware to show for all his sacrifices during practice.
Truly amazing was that Jean came back with SIX GOLD MEDALS wrapped around his neck!
Two individual gold medals: 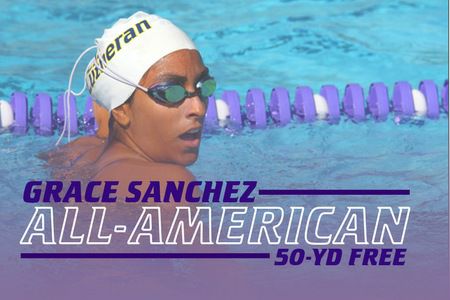 From Vision Swim, one of my earliest and longest swimmers takes it to the next level.

INDIANAPOLIS — California Lutheran's Grace Sanchezgarnered All-America honors as she finished in 10th-place for the 50-yard freestyle at the NCAA Division III Swimming and Diving Championships Wednesday at the Indiana University Natatorium. Ben Brewercompeted for the Kingsmen and placed 19th in the 500-yard free.
Sanchez is the first CLU woman swimmer to attain All-America status. She finished second in the consolation finals of the 50-yard free with a time of 23.48 seconds. In the prelims, she broke the school record as she touched in with a time of 23.44. Here is the clip of Sanchez's All-America run in the consolation finals (second lane in).

Artis Thompson III had the most inspiring run in Oklahoma City

2017 summer Junior Olympics underway. And kicking off our first finals of the weekend with a first place.

NEWS: Swimming Named Hardest Sport By The IHSRC The IHSRC laid it all on the line and voted on which sport had the highest cardiovascular requirements and the results may shock you. They also might not shock you since this is totally biased and another Fake News Friday.

Why Swimming is So Good for You 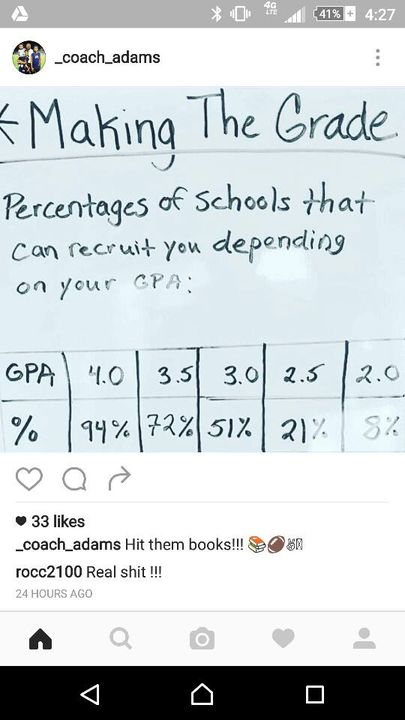 Catch the Trailer of the New Movie, Coach of the Year

Jean Darbo getting 8th overall at the IMR/IMX challenge meet. At 8 years old also the youngest.

Challenge accepted. Donation given. Don't forget the cause.

Grace and Timea warming up in the lane with Missy Franklin. No biggie.

Congrats to our swimmers at JAG's Josh, John, Grace & Timea. New PBs for Josh (50 fly) in his first championship meet, & John (100 br). Grace and Timea made finals on last day of JAG's. 2nd overall and new PB for Timea.

Sporting the new Vision Swim "love handle eliminator max", coming to a store near you.

Year round
$95/month
One time team Registration fee of $50.

Other Sports & Fitness Instruction in Sherman Oaks (show all)

We operate safe, professional, convenient, and FUN programs focused on a variety of sports and recreational activities for children ages 5-14 in the Los Angeles area

Van Nuys-Sherman Oaks Park is the proud home of AYSO Region 58, where over 1,200 kids spend Saturdays together developing a life-long passion for soccer!

Personal fitness& nutrition coatch Guide you to a better lifestyle