Good luck to our who boxes tonight for in a dual 🏴󠁧󠁢󠁳󠁣󠁴󠁿 v 🇬🇧 in England. Come on Caitlin👊👊

The Light-Welterweight returned to the Games following his controversial stoppage as a teenager in the prelims to Northern Ireland’s Chris Carleton in the Games in Edinburgh in 1986.

In the four years in between, the Clydebank boxer had gained a lot of experience, boxing at the European Championships in Torino, Italy in 1987 and reaching the Quarter-Finals of the 1988 Olympic Games in Seoul, South Korea.

Charlie defeated Brunei’s Mokmin Rahman by 2nd round stoppage in the prelims, before claiming a 3-2 split decision against Nigeria’s Moses James in the Quarter-Finals.

It would be a unanimous points victory against Australia’s Stefan Scriggins in the Semi-Finals, before a 3-2 decision went the Scots way in the Final against Kenya’s Nicodemus Odore.

Charlie was one of just five Scottish Gold medal winners at the Games in New Zealand, alongside the likes of 10,000m runner Liz McColgan, while he became the first boxer to win Gold since Tom Imrie’s Light-Middleweight success in Edinburgh in 1970.

Charlie Kane, speaking in 2019, said: “It is only now when I look back at what I achieved in my career that I realise how significant this [Commonwealth gold] was, but at the time I really didn’t realise what I’d achieved at that moment.

“I can remember while waiting on the decision, I was saying to myself please god, please god let it be me.”

Charlie was one of two Scottish medallists at the 14th edition of the Games, as Bellahouston’s David Anderson won the Bronze medal at Lightweight.

Anderson stopped Papua New Guinea’s Augustine Aba in the third round of their preliminary contest, before a unanimous points victory over England’s Peter Richardson in the Quarter-Finals, before suffering a 3-2 split decision defeat to Uganda’s Godfrey Nyakana in the Semi’s.

'Lifeline' community boxing club in Glasgow celebrates massive success A COMMUNITY sports club in Drumchapel has been described as a 'lifeline' to those who attend.

New session for school kids at Antonine BC in Dalmuir.

We are looking to build our school age boxing team.🥊
We have a new session on Monday and Wednesday 6:45pm till 7:45pm.
If you are a girl or boy interested in becoming a competitive boxer please get in touch.🏴󠁧󠁢󠁳󠁣󠁴󠁿🥇

Think they would have put https://www.clydebankpost.co.uk/news/19833134.dalmuir-clubs-boxers-pack-quite-punch-return-ring/

Drumchapel's Leo Church wins the MTK Box Cup in England 🏴󠁧󠁢󠁳󠁣󠁴󠁿🥇 with a brilliant performance in the final. Leo had his opponent down on the canvas in the 2nd round and then put on a brilliant boxing display in the 3rd round to pick up the MTK box cup belt.

antonineboxing have a kids Academy starting this week. Age 7-11 Monday and Wednesday 5:30pm. This week is free to try.

Only a few more spaces available for our kids boxing Academy. DM to book your kids spot.

Join our Cloud HD Video Meeting Zoom is the leader in modern enterprise video communications, with an easy, reliable cloud platform for video and audio conferencing, chat, and webinars across mobile, desktop, and room systems. Zoom Rooms is the original software-based conference room solution used around the world in board, confer...

Good to see the clubs back in the gyms 🥊

A wee insight into Drumchapel Boxing Club back in the noughties.
Mind like and subscribe to our YouTube channel if u want to see more films. 👊

Two years ago Drumchapel's Argo boxing club headed off for an epic boxing trip to Slovakia 🇸🇰 via Poland to take part in the Slovakia box cup. Ciaran McCafferty 🏴󠁧󠁢󠁳󠁣󠁴󠁿 was pipped in the final by Ukraine 🇺🇦 while Leo Church 🏴󠁧󠁢󠁳󠁣󠁴󠁿 picked up gold v Czech Republic 🥇
This is boxing 🥊
Thanks to Ciaran for the input👊

A brilliant film from the 80's featuring Argo boxer Lawrence Goold v Wilson Docherty. A great wee bit of Argo history featuring Jimmy Harvey cornering Lawrence. And also Jim Robertson a Dick Rafferty being the men in the middle.
Keep those films and pics coming guys. 🥊 🏴󠁧󠁢󠁳󠁣󠁴󠁿
Thanks to Louis Black for the link 👌 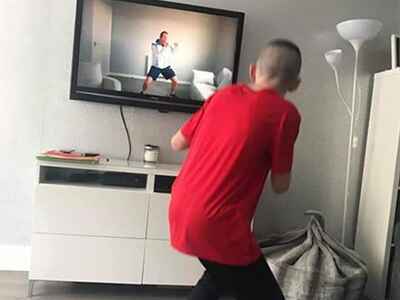 Boxing friends please click on this link and vote for the King of Sport... Boxing

For Charlie Kane, a young unemployed lad from Clydebank, the desire to be a successful boxer was shaped by the support and encouragement he received from Jimmy Creswell, his coach at Antonine Boxing Club, Frank Hendry, Secretary, Scottish Amateur Boxing Association and Dick McTaggart, National Team Coach, Scottish ABA. All three men had their own input into Charlie’s amateur career, which saw him develop from a promising youth club boxer to Commonwealth Games Gold Medallist.
Read the full story of Charlie's unbelievable boxing journey here...
https://boxing.stir.ac.uk/2020/03/23/charlie-kane/

Clydebank's Sam Mccarthy in action for Drumchapel BC

Ian McGirr former Antonine BC boxer and Drumchapel BC coach takes on Carl Roberts back in 1993. Quality performance from Ian away from home winning over 6 rounds. 👌

A new page to promote boxing in Clydebank and Drumchapel. Both areas have a long history of working together to create amateur and professional boxers. Some have went on to become champions others have used boxing to build confidence and character.
If you have any pics, vids or stories old and new drop me a message. 🥊

Other Sport & Recreation in Clydebank (show all)

family gym in centre of clydebank

Clubbercise classes in Clydebank. Spreading the GLOW in West Dunbartonshire!

Dalmuir Plots Association is a charity that allows anyone from a G81 postcode to rent an allotment.

We are a thriving community centre in Clydebank. For further information contact Ali on 0141 533 707