Yuishinkai Aikido techniques are soft, circular and natural. Never forced. By gently redirecting the force of an opponent, the techniques become devastatingly effective. At the core of Aikido is the Japanese concept of Ki. Aikido Yuishinkai seeks to unify the Ki of our body and minds with universal Ki; hence, the literal translation of Aikido is “the way of harmony with Ki.”

We are dedicated to d

iscovering a deeper understanding of the natural concepts of Aikido. We are dedicated to practical and rational excellence in training. Always seeking to perfect our knowledge of the use of Aikido to improve our lives. Our classes are taught by sensei, who are still active students. We are seeking like-minded individuals to join us on this path. It was our honor to host Koretoshi Maruyama Sensei in Honolulu this September. All students of Aikido were welcome. Meeting students from other dojo’s brings us closer to Aikido’s spirit of harmony. Aikido Yuishinkai is “Aikido without borders”

Working on a logo design for our dojo. Based on Maruyama Sensei's brush calligraphy of the Shin kanji on a tsuba (sword guard). 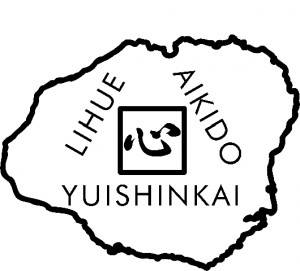 Going to train with Koretoshi Maruyama Sensei and Godwin Esaki Sensei on Kauai tomorrow. I'll be sure to upload pictures and details next week.

INVITATION: If anyone is on Kauai from 7/8-711/14 contact me cell:808-256-9944 or email: [email protected], for information on classes. Should be a small group and excellent training! All aikidoka are welcome. Small fee donation to be determined.

This Blog is my effort to put into words my personal understanding of Aikido. It isn't an organized recitation of lesson plans, but a day by day documentation of my thoughts on Aikido as they occur to me. For years I have taken notes with pencil and paper, accumulating numerous binders, folders and tablets of varying sizes and in various stages of disintegration. So, in order to better preserve my notes for posterity, I have decided to go digital. Please forgive me if my ego gets the better of me, or if I over philosophize. I'll do my best to stay on point. Hey, maybe no-one will ever read this stuff.

Aikido develops coordination of mind and body. Through its philosophy and techniques, Aikido brings us into harmony with our self, the environment, and the Universe. Unlike many other martial arts, Aikido requires no advantage in strength or speed, and is practiced successfully by people of all ages and abilities. Aikido will improve your flexibility, coordination, concentration, fitness, and balance.

Aikido is not a system of combat it is a system of self defense. There are no lethal techniques and atemi (strikes) are more for distraction than to cause injury. It has no tournaments, competitions, or sparring. Instead, Aikido techniques are practiced through a coordinated repetitive process of alternating attacks and defenses.

To paraphrase the founder, the goal of aikido is not the defeat of others, but the defeat of the negative or aggressive attitude that inhabit one's own mind and limits its potential. Aikido is often translated as "the Way of Peace". Ueshiba Sensei’s goal was to create a martial art that practitioners could use to defend themselves while also protecting the attacker from injury. In a general sense, Aikido is performed by blending with the negative Ki or aggressive force of the attacker and to redirect that force back against the attacker. The attacker essentially defeats his self. There is no blocking or injurious striking – just blending and redirection.

You can join and begin attending classes at any time. We recommend that you come by during any regularly-scheduled class to observe. You are also welcome get on the mat and try a class.

A bit of advice: Aikido is a complex martial art. The first few months are the most difficult, we highly recommend that you set a three month goal of regular attendance and stick to it! You will be amazed at how fast those first few months go by and how much you have learned in such a short period of time. It’s as simple as that. Just get on the mat and start practicing! Who knows, you might get hooked.

Tuition for our classes and the cost of training supplies are kept as low as possible. Membership fee covers the cost of dojo rent, training insurance, AYH activities, training equipment and supplies.

None of the instructors receive payment for their services.

Words have a power of their own. The power of the spoken word was recognized in ancient Japan as ‘kotodama’, or word spirit. To speak a word is to encourage it to come true. Your life energy responds to sounds and thoughts, as expressed in the spoken word. When you fill your daily life with positive words and thoughts, your life is filled with the power of Ki. In this way you can keep mentally and physically healthy, and have a positive influence on others as well. Words have real power, and can produce practical results in your life. I have written the following membership motto for members of Aikido Yuishinkai. I encourage you to read them aloud each morning and night to keep your subconscious in a positive state of mind.

Aikido Training is for everyone

People of all ages enjoy the practice of Aikido. A positive attitude is more important than physical ability. Classes are structured to allow students to practice in a way that is appropriate for their own level and abilities. Training is physically challenging, but not harmful.

Aikido is performed by blending with the motion of an opponent and redirecting the force of his attack, rather than opposing it head-on. The aikido practitioner blends with and leads an opponent’s attack using entering and turning movements with the purpose of controlling the opponent with minimal effort, through the use of Ki power. The techniques are completed with various throws, joint locks, wrist locks or submission holds. Students will study defensive techniques against single and multiple opponents.

Thank you everyone for coming to the first class of Aikido Yuishinkai Honolulu. May 23, 2014.

There were 11 people in attendance – 9 practicing on the mat. The Made in Germany dojo mats were perfect (not too hard, not too soft, just right), the night was warm and the Ki was flowing. Good fun had by all – and we even broke a little sweat.

Hopefully we sparked new and renewed interest in all and the next class will be full of new students and experienced Yudansha ready for more.

See you next class!

Other Gyms in Aiea (show all)

Building Champions for Success at All Levels in Life Beginning, Intermediate, Advanced and Competi

Jazzercise is a pulse-pounding, beat-pumping fitness program. It's a calorie-torching dance party that gets you results!

"Champions of Life" TKO Hawaii is the Hawaii branch of TKO, established in 2006 by Sensei Aaron Oan