if you even ...have any desire...to own something great...then take a PEEK

I am a nationally recognized wildlife artist specializing in birds, fish & reptiles. My passion is to produce anatomically correct musuem pieces every time

Art Shows are back!
I just updated my show schedule for Colorado on the website.
Hope to see you all soon!

I’ll start painting these in a few weeks and will post more photos then.

Penguin exhibit at ABQ BioPark is opening soon. Here is a penguin parade to show you a little of what you’ll be seeing. (open this video up so it doesn't cut off the heads)

These are spawning Sockeye Salmon hand and power carved. Original one of a kind piece. The board that hold the Salmon is a 100 year old piece of mesquite.

Brook Trout - Brook Trout can be found in streams, rivers, lakes spring ponds, and creeks. The body of the fish is brown and dark green tones. At the flanks, dorsal fin and tail you can find the marbled partern. Like the chard it is white on the leading edge of the lower fins.

Heres another addition to "THE CUT ABOVE" Series. Five 9" Cutthroats completed this week.

Here is a project I've been working on. I'm hoping to have it completed by December. The piece stands 9' tall with a bald eagle, a salmon amd it will have a black bear cub climbing up the tree once completed.

The Bald Eagle is the only eagle unique to North America. Its distinctive brown body and white head and tail make it easy to identify even from a distance. When flying, the bald eagle very rarely flaps its wings but soars instead, holding its wings almost completely flat. Its hooked bill, legs and feet are yellow.

It's diet is primarily fish, carrion, smaller birds and rodents. Eagles are also known to prey on large birds and large fish.

Happy 4th! Last day in Breckenridge. A cool 40 degrees this morning but it's warning up now and the show is busy. Be safe my friends!

Today I'm in Breckenridge Colorado at the 33rd Annual Breckenridge Art Festival. It rained A LOT today!! Hoping for some sunshine tomorrow. 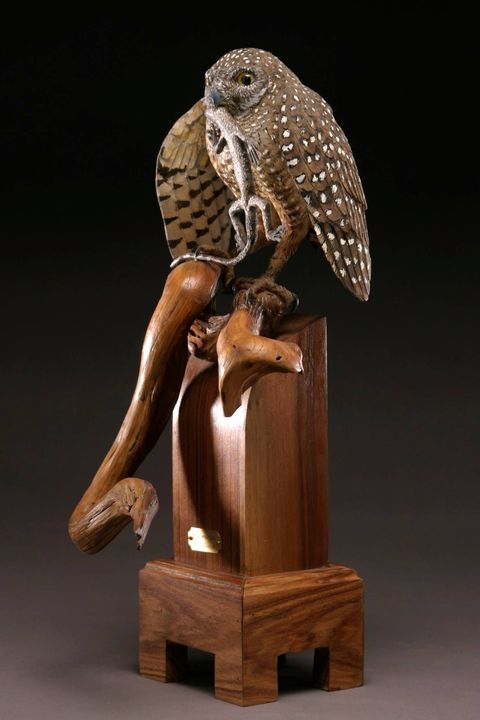 The Burrowing Owl and the Barn Own. Burrowing owls are active during the day, especially in the spring when they gather food for their large broods. This species of owl prefers open areas with low ground cover. They can often be found perching near their burrow on fence posts and trees. The Barn Owl typically hunts at night and unlike other owls they don’t hoot, but the male has a distinctive shrieking call, often repeated several times

Here's a sketch of an elk I did. Heres the Salmon Project I started a few weeks ago. My computer crashed and I wasn't able to post until today.

Other Sport & Recreation in Albuquerque (show all)

TriSportCoaching offers comprehensive triathlon coaching in group training programs, clinics and in individual sessions. Our services cover training for specific events like an Ironman or a first time sprint distance, to sub-disciplines of each sport

October 16, 2022 - Albuquerque, NM Ranked as one of the Top 25 Marathons in the world, the Big 5 Sporting Goods Duke City Marathon is New Mexico's premier racing event and a Boston Marathon Qualifier.

Join WW Studio Albuquerque Coors and become inspired by people like you who are losing weight and creating healthier, happier lives . Visit our website for the latest time and address information.

Trek Bicycle Albuquerque is your destination for the latest products from Trek and Bontrager, service and tune-ups for bikes of any brand, and everything you need for your next two-wheeled adventure..

Lifting Spirits around the World
Albuquerque

Provide an opportunity for the Balloonists in Albuquerque and around the World to say THANK YOU to the “front-line workers” that exhibited steadfast determination to help where help was needed. #liftingspirits #liftingspiritsaroundtheworld

If you want to play like a CHAMPION, learn from a CHAMPION. Coach Scott Peterson has 20+ years of successful experience in the NBA, college, and high school basketball.

Official page of the New Mexico Dressage Association, a GMO of the United States Dressage Federation. Contains show and clinic information, membership information, the newsletter, and links to other sites See less