My life motto - in both my professional and personal life - summed up perfectly here.

I care about everyone I know, work with/for, teach and encounter - even the stranger I pass on the street. So hum. I am you. You are me. 💜

Very proud of my dear friend Justin Blazejewski and what he has created with VETOGA. It's truly inspiring to be a part of Vetoga's mission to spread yoga, meditation & healing arts to our veterans, active military, first-responders and those who need it the most. Mike Stickley Claudia Cavazza Sean Kohler

twitter.com “Start your new year on the right foot with a package of classes, 10 for the price of 9! And be sure to join us at our next class with on 1/9: https://t.co/n6ufHsMTBc ”

2017 is rolling to a close. The last BeerYoga class of the year is Tuesday . End the year right.

My new film! A creative way to share what I do now, why I do it and how I do it. Yoga + Real Estate = Just Works https://t.co/Z9ruJsPj1S 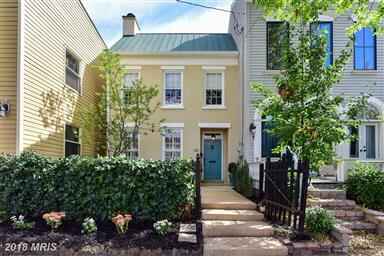 Post yoga on Sun visit me @ my Open House-221 N West St [email protected] Then heading to to be social. https://t.co/uNXap5Fewu

guest teacher is stepping in tomorrow night for the 7pm class. Buy your tix today!

Guest yoga teacher stepping in at tomorrow night Thanks

The last class in August is tomorrow! No class next week (Labor Day week). If you don't make tomorrow see you 9/12. Cheers & sun! https://t.co/NCjXZinB2M

At this moment, on a sunny day after a bike ride, the Integral IPA is winning 1st place as my fav beer.

There's no "doing" yoga. Yoga does you! Each breath, pose, sensation & mental reaction are all a result of being in a state of yoga.

images.google.com Found on Google from zollofca.com

BEER and YOGA with VETOGA

eventbrite.com/e/beer-and-yog… Come join us for YOGA, BEER and LIVE MUSICas we help support VETOGA and their upcoming yoga teacher training that transforms military and veterans into yoga instructors. The event will start with a 60 minute YOGA class followed by BEER, RAFFLES, MUSIC AND FOOD !! VETOGA is a local non-profit orginiz...

That moment a client calls out of the blue to say "do you know how good you are?" No names -you made my week. I just do my best.

As a Realtor in the DC Metro area, I get asked all the time "when are you getting your DC license?" With six cities and counties in Virginia making the top 10 "best places to live" in the nation list, what's the rush?!?!…https://t.co/X8pUJx9ElU

lnkd.in/dppf3S9 Six cities and counties in Northern Virginia made a top 10 "Best Places to Live" in the nation list out Tuesday.

In your mad dash to beat holiday traffic, don't forget tix are on sale now for next Tues. Gobble, gobble. C u 11/29

Tues 11/15 is the last class . I should clarify...last class before turkey day. Sign up while there are spots.

Come hungry to sold out 2morrow ! enchiladas will be for sale. Sign up 2morrow 8am for Tues 10/4 https://t.co/m9krlSM9KL

pic.twitter.com/m9krlSM9KL Get the whole picture - and other photos from abellaYoga 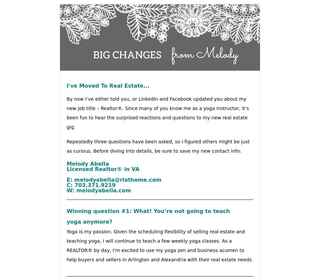 Off the Yoga Mat (Kinda)

The official announcement as to what I've been up to lately was sent out via email not long ago. If you aren't on my…https://t.co/659oegBq8y

lnkd.in/eSaburM By now I’ve either told you, or LinkedIn and Facebook updated you about my new job title – Realtor®. Since many of you know me as a yoga instructor, it’s been fun to hear the surprised reactions and questions to my new real estate gig. Repeatedly three questions have been asked, so I figured others ...

No BeerYoga tonight The 1st one to name the PC beer in pic gets a free class next TUES. Reply here. https://t.co/euEmIuS4c3

pic.twitter.com/euEmIuS4c3 Get the whole picture - and other photos from abellaYoga

Tomorrow night, it's another edition of the wildly popular w/ . Come on down, dog. https://t.co/wx6FpNWYqH

pic.twitter.com/wx6FpNWYqH Get the whole picture - and other photos from Port City Brewing Co

Sgt. 1st Class Guerra surprised his two boys at after being deployed since Oct. https://t.co/h3s4hPgaTR

pic.twitter.com/h3s4hPgaTR Get the whole picture - and other photos from Arlington Schools

Big announcement pending. Let's just say it has something to do with https://t.co/Tut9PfH0Rk

Tonight, is in the house for ! Sign up for next week's class today! https://t.co/ntHGIAxPx9 https://t.co/gRuu4sD83v

pic.twitter.com/gRuu4sD83v Get the whole picture - and other photos from Port City Brewing Co

I've been teaching yoga full-time 10 yrs. Prior to that, I was in the corporate world for 10yrs. Can't wait to announce my next 10yr. plan

It's crazy how I just placed an order (skincare goo, book & grilling gadget) & they'll arrive this afternoon. What did we do b4?

Totally agree . Award winning beer & a fun dose of yoga make the place to be on Tues 7pm. https://t.co/eSz9hT9KF5

twitter.com/engagedc/statu… “. brings you every Tuesday at 7PM. There isn't a better combo! https://t.co/WNxnajzc1H”

Other Sport & Recreation in Arlington (show all)

Celebrate the Independence Day by learning dance from the best instructors for the best prices. Disc

Revolutionizing baseball instruction via the internet.

Gotta Run is a specialty running store that services runners and walkers. We offer a full service g

Arlington Soccer Association (VA) hosts a number of tournaments each year. This is the Page for all

We specialize in bicycle sales and service. Located in VA, we're passionate about both customer service and bicycle advocacy.

Do you need to restring a racquet or have any questions about racquets, stringing, or tennis? Feel free to send a message, ask for a quote, and check out the huge selection of strings available. Please check out the Service tab for quotes

District Angling is an independent company formed to fill a small niche in the Washington DC area.

We Run the Nation!