Moving SALE!
Who's near Colorado Springs, Colorado? Our friend and EquiPride dealer, Vicki lives in the springs but is moving soon! Get a good deal when you help her sell her EquiPride stock before Thursday! $55 wholesale per bag—$20 off retail! She only has a few and first come first served! Tell your COS friends!

Riding Instructor/coach, Animal Reiki Master/Teacher/Practitioner, and Animal communicator. Have a problem or concern, shoot me an email.

Now Riding on Purpose, formerly Cloverleaf Horse Farm LLC; has been in business since 1984. Originally specializing in Arabians and Arabian crosses, now also working with OTTBs and sport horses of all breeds. Special emphasis on dressage as well fixing rider and horses biomechanics or dysfunctions. I am also a certified Reiki Master/Teacher practitioner as well as an inter-species communicator. Animal Reiki classes offered regularly. 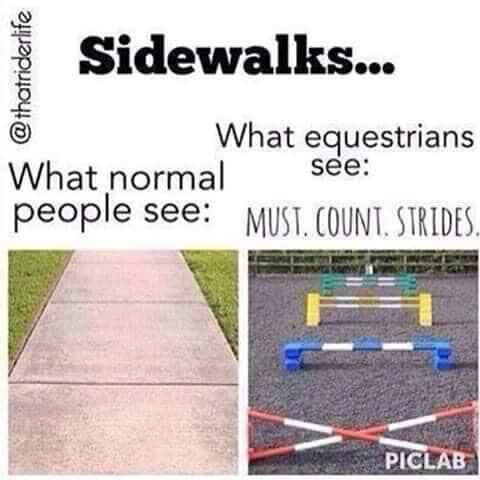 Something to think about every time you pick up a lead line, a lunge line, the reins. Every time you stand with your horse.

This is a stallion who loves mares and in the field across the driveway there were two pretty mares making eyes at him yet he is staying "with" Chantelle Matthews Dressage (during a photoshoot pause, hence the dress) The lead rope is draped softly across his back, there is no chain across his nose.

What anchors him to her and her to him is not submission or force but a pleasurable companionship that comes from working together, living together, affection, respect, friendship.

"I have watched good horse people and they do not need to move a horse's feet to capture his mind. They stand quietly by the horse, and the horse changes. Sometimes a person, just by taking the lead rope, changes the whole horse. Of course we pay less attention to the fact that WE change in that same moment too.

When we become aware that we are also being changed in the act of training, not just the horse, when we realize that through our horses we have opportunities to become calmer, gentler, more patient and generous, more grounded and understanding but also more, aware, curious, content, happy - that is when we experience the full measure of what a gift to mankind horses are. "

I am liking this Jane from Confident Rider more and more. I cannot count the number of times with young, green or fresh horses that I have simply dismounted to get their brains back when out on a trail, walk whatever time needed, then remounted, or not. It was about each of us having a good experience and living to ride another day. I used to call that part 'hike a horse'. ;)

Trail riding, to my mind, is such an art form. I always laugh to myself when I read comments from riders who flippantly throw comments around like “oh me and my horse are just happy hackers” or “we only ride out on the trail” as though it’s some inferior state of being to riding in the arena or competition.

Little do they know, I think to myself, that half the world craves being able to simply open the gates and happily ride off down the road.

Personally speaking, I’m a pretty methodical trainer and if in doubt, I always err on the side of caution rather than risk. I spent longer than most working with my horses on the ground and in the saddle in the arena before I ventured out with him on the trails- and even that I have done in a very progressive way.

My mindset is such that I’m happy to be on and equally happy to be off. The question is not so much making it from A to B as much as it is being able to create good experiences in between those two points. As my start point was essentially sitting on board a big, green, sensitive horse, if I was met with challenge or tension, I would be assessing the best and safest point for me to deal with that from. Sometimes it’s staying on board but equally so it could be hopping off and walking beside him until whatever tension we held had dissolved.

When I think about time frames around this, I’m not talking days, weeks or months- I’m talking years. Developing confidence in different situations is so individually dependent. Just as some humans develop confidence and aptitude faster than others in some situations, so to do our horses.

I was on a group trail ride recently with a really mixed group, a first for one of the lovely horses who was with us. She coped well for most of the way and then it became obvious that her cup was overflowing. Her rider got off but was a mixed bag of emotions; frustrated, upset, embarrassed, maybe even a little angry.

I mentioned to her that I thought she’d done a good job, that I’ve been many a times in situations where I’ve jumped on and off, where I’ve walked on foot the same number of miles as my horse.

Expectations and the feelings of pressure (especially in group situations) can often get the better of us and leave us with an emotional hangover that’s of our own doing. If you are doing what needs to be done in the moment, there’s no need for shame or embarrassment. It’s not a predictor of the future.

It really is just dealing with presents in the moment and moving from that place.

It just takes time. And we have that, if we let ourselves have it.

Whenever we ride in public or are involved in group situations with our horse, there are always so many different dynamics that we need to contend with. If we consider ourselves in isolation, we have the various concerns or thoughts about what riding in a different environment can bring.

On top of that, we have to tend to our horses and make sure that their needs are being met and they aren’t being placed in a situation where the any discomfort they face outweighs the skills they have to be able to emotionally self-manage.

And then we have the instructor or clinician (should that be the situation) who, for better or worse, adds to the dynamic depending on their intention, style of teaching and/or focus.

There’s a lot of moving parts.

One thing that I’ve always anchored myself to on the various adventures I take myself on with my horses is this principle or thought:

At the end of the day, I’m the one who has to keep showing up for my horses.

Not my instructor. Not the people watching or those around me. Not my critics or supporters.

Tomorrow, it’s me and me alone, that catches my horse, saddles up and gets on.

And as a consequence, I have to take full responsibility for the situations I place both myself and my horse in, and advocate for both of us.

If I ignore my intuition; if I push past our capabilities in the moment in an effort to keep up with others; if I shape shift to fit the situation instead of being there for my horse, it’s easy to find yourself in a situation where you and your horse lose confidence, or worse still, get hurt.

And pushing on in spite of myself is something that I’m no longer willing to do.

Of course, there are those times when we know that we are ready and it’s time to step up.

But there are equally those times when we need to use our voice and simply say, not today.

Bravery exists both in the doing and the not doing.

And sometimes it gets practiced in the simple words of Not Today.

My prayer is to never know when my last ride will be for either me or any of my horses. Life is fragile. Be kind to yourself and your riding buddy every ride....

If you knew when your last ride would be, would you do it differently?

Would you have found the energy for that ride when you’d had a long day and felt too tired?

Would you have tacked up and gone for a hack in the pouring rain instead of putting it off until better weather?

Would you have forgone that lazy Sunday and entered that competition instead?

Would you have lent a more time to the small things? Groomed them for a bit longer? Spent an extra five minutes watching them graze over the gate?

So treasure each and every moment.

Enjoy every ride, forget mistakes quickly, ride in the rain, be late for work because you just wanted five more minutes of grooming, riding, or even just sitting in the stable.

The truth is that we never know how much time is left and for that very reason you have to make the very best of every moment.

Take your time, remember it. One day you’ll be so grateful you did.

Monday mindfulness training tips in the format of 'Did You Know?' 'Try This', or 'AHA Moments':
I love Doc Susie!
I may also add that when preparing to do a transition under saddle, the you 'just put it in your mind' and your body will unconsciously do it without any overt cues or aids. When doing groundwork, just the tone of your body will help influence the horses speed, direction and balance. It is so much nicer to work on being softer and quieter with our horses in a way that they understand and can appreciate. 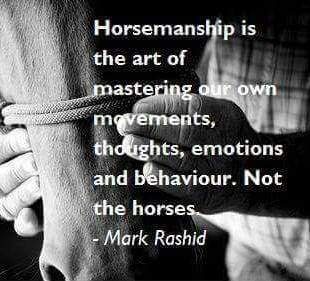 Finally got the new website up. The last one, that I really liked got outdated by godaddy and taken down while we were moving.
www.ridingonpurpose.com

riding on purpose llc Specializing in educating riders and their horses proper biomechanics,  kinematics and connection while riding or on the ground. 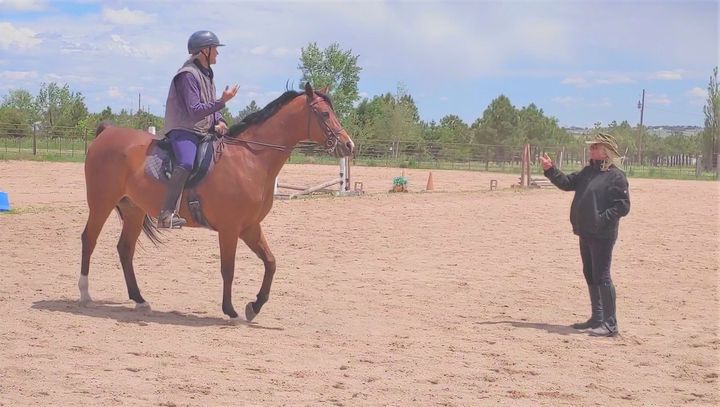 And if you are helping, you better do it as told to do it. LOL When you think about it, the present moment is all we ever have! When our minds are elsewhere, life is passing us by. We miss the little things which can turn into big things! There is always opportunities if we are living with awareness. Be Mindful... Pause... Connect! 🙏💗✌🦉 John Shearer MM

So she finally realised they were all talking to her and expressing their difficulties while executing the moves she wanted. She is sad, however bringing into awareness a fact that they are willing but in need of intelligent analysis of their difficulties is a breaking point.

Originally, Cloverleaf Horse Farm, changing the name to Riding On Purpose in 2017, has been in business since 1984. I consider myself a Personal Equestrian Connection Coach, helping with balance issues in both horse and rider and promoting the idea of a two way conversation with your horse whether you are a competitor or pleasure rider. Providing a continuing education that leads to a better connection and soundness with your horse, riding or doing ground work. I am also a certified Reiki Master/Teacher practitioner as well as an inter-species communicator.

Other Sport & Recreation in Crystal River (show all)

Swim with manatees! Fun for the whole family! Visit https://CrystalRiverManatees.com for an Exciting Manatee Adventure!

Keep up with our seminars by following this page.

The Royal Gems are here to shine! Keep Updated here with the newest achievements and details!

This is the future site of Fishcreek Glampground - A Luxury Canvas Tent and RV Campground. While we

Back Country Fishing and Scalloping

A page where we can get together and plan some rides. Post as much as you like! Anybody up for some

CRBB is an educational organization which works to preserve and continue local maritime heritage.

I have started a new and adventurous job with Hunter Springs Kayaks as a river guide! Showcasing what our beautiful town is known for. Our beautiful waters and loving manatees. Join and share my page please!

I provide Salt and freshwater fishing Charters in Citrus County FL. For Saltwater Charters I target