On It Sports Management
Beverly Hills 90210

GO BRUINS! Best night out with Mikhail! UCLA Pauley Pavilion
https://youtu.be/t-SnIa0koV8
🏀🎂On April 15, 1942 Walt Hazzard was born in Wilmington, Delaware. Hazzard attended Overbrook High School in Philadelphia, where his teams went 89–3 and he was named the city's player of the year when he was a senior. Hazzard then went on to UCLA, where he became a key player on the Bruins varsity basketball team. In Hazzard's first season on the varsity squad, UCLA made their first Final Four appearance in the 1962 NCAA Tournament. UCLA’s first undefeated season in 1963–64 was in no small part due to Hazzard, his backcourt partner Gail Goodrich, and Coach John Wooden. The team won its first NCAA Championship, and Hazzard was selected by the Associated Press as the tournament's Most Outstanding Player. Hazzard was chosen as an All-American and also selected as College Player of the Year by the United States Basketball Writers Association. Hazzard and Bill Bradley earned a spot on the 1964 Olympic basketball team for the U.S., which won the gold medal. Hazzard was pre-draft territorial pick in 1964 by the Los Angeles Lakers. Hazzard played in the NBA, first with the Lakers (1964–1967), then the Seattle SuperSonics (1967-1968), Atlanta Hawks (1968-1971), Buffalo Braves (1971-1972), and briefly for the Golden State Warriors (1972-1973). He returned to the SuperSonics for the 1973–74 season, after which he retired from professional basketball. While playing for the Supersonics in their inaugural 1967–68 season, Hazzard scored a career high 24 points per game, averaged 6.2 assists and 4.2 rebounds per game and was selected to play in the 1968 NBA All-Star Game. He would go on to coach at Compton College (1980-1982), Chapman University (1982-1984) and UCLA (1984-1988). In the summer of 1972, Hazzard embraced Islam, and started going by the name "Mahdi Abdul-Rahman" in 1972–73, his 8th season in the NBA. In 1976–77, he returned to study at UCLA, completing his degree in kinesiology at age 35. By 1980 when he joined Compton, he changed his name to Abdul-Rahman Hazzard. One of the reasons he cited was the recognition of the name Hazzard. On November 18, 2011 Hazzard died at the UCLA Ronald Reagan Medical Center due to complications following heart surgery. He was 69. His number 42 jersey was retired by UCLA in 1996 in Pauley Pavilion, but Hazzard gave his permission for stand-out recruit Kevin Love to wear the number.🎂🏀 (Photo Credit: Basketbal Archives)
NCAA 初體驗 - 南加州的世仇之戰 UCLA Vs. USC
這感覺大概就像，百事可樂跟可口可樂，
但我覺得用「清交梅竹賽」來比喻會更有感受，
不夠他們的世仇淵源，真的很深很扯很激動。
雖然兩支球隊近期都不是強權，
但UCLA有一個目前沒有其他大學能突破的紀錄！
下支影片告訴大家！
.
P.s能看到「天鉤賈霸」，這場太值得了！
@ UCLA Pauley Pavilion
📕On December 10, 1973 UCLA’s Bill Walton and Maryland’s Len Elmore were both featured on the cover after the Bruins 65-64 win on December 1st at Pauley Pavilion. The 4th-ranked Terrapins began Elmore’s and Tom McMillen’s senior season, 1973-74, on the road against the top-ranked Bruins. UCLA had won a record 76 consecutive games at Pauley Pavilion. Since the NBA’s Capital Bullets were practicing and playing at Maryland’s Cole Field House while the Capital Centre was being completed nearby, Lefty Driesell got some of the pros to work with the Terps. Hall of Famer-in-waiting Wes Unseld helped Elmore prepare to defend Walton. At the suggestion of sophomore shooting guard Mo Howard, Driesell also had Maryland hold some practices at midnight to prepare for the 9 pm start in Los Angeles. That’s how the now-traditional “Midnight Madness” to the start of college basketball season began. The Terrapins fell behind 65-57 with just 3:37 remaining. But they scored the next 7 points, and when UCLA freshman Richard Washington missed a one-and-one, the visitors had the ball and 22 seconds to pull off the upset. Elmore had been Maryland’s most effective weapon with 19 points and 14 rebounds while Walton registered 18 points and 27 rebounds but made just 8 of 24 shots. However, Driesell called for “The Special,” a pick-and-roll on the right side of the court with John Lucas and McMillen. Lucas was supposed to drive and dish to McMillen at the top of the key if his path to the basket was blocked but Lucas stepped out of bounds. Although Maryland lost the game, the Terps went on to win 23 of its remaining 27 games. During the season, the Bruins' 88 game winning streak would end. The defeat was a 71–70 decision to the Notre Dame Fighting Irish. Coincidentally, the Bruins' last loss was to Notre Dame and Austin Carr in 1971 by a score of 89–82. In the postseason, UCLA's record streak of seven consecutive national titles was broken. North Carolina State defeated the Bruins 80–77 in double overtime in the NCAA semi-finals.📕 (Photo Credit: SI Online)
#SI65 #UCLA #Maryland #Bruins #Terrapins #Terps #BillWalton #LenElmore
Wishing a heartfelt congratulations to our friend and ambassador Miss Val on her incredible successes and upcoming retirement. It was truly a site to behold at UCLA Pauley Pavilion last weekend, and we cannot wait to see what you do next!

Subscribe to our YouTube Channel by just clicking on the link below for more Amazing Hoop Videos!

https://www.youtube.com/channel/UCBfmMubNfEUmT5APgCBf3Fg
#JumpJiveThrive Giveaway!!! We are giving away 3 pairs of tickets to #JumpJiveThrive this Sunday, October 8th UCLA Pauley Pavilion. Here's how to enter:

That's it! First 3 people to enter will win a pair of tickets! See you there!
OK, Dance Fans! Let's start with some ticket giveaways for Jump Jive Thrive event this Sunday, Oct. 8 at 6pm UCLA Pauley Pavilion.

Here's how to enter:

1. Follow this page and tag a friend who you think would also want to attend.

Then answer this question via email:

**Who was injured the day I watched UCLA gymnastics practice?**

EMAIL ME your answer: [email protected]

3. Winner must be 18 years of age or older. You are responsible for your own transportation to LA. Winner will receive 2 tickets to attend the event. You have until Friday, Oct. 6 at 11:59 pm PT to enter.

Be a champion. Join us. Edwin W. Pauley Pavilion is an indoor arena located on the UCLA campus in Los Angeles, California. It is home to the UCLA Bruins men's and women's basketball, volleyball, and gymnastics teams.

Want to be part of an epic Pauley Pavilion TV spot?

Email [email protected] by tonight with your name, a photo, and availability on Oct. 14 and 15. 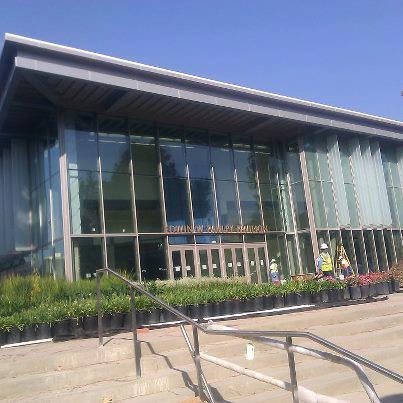 The new Pauley is one step closer to opening. Today, the sign over the door was uncovered. Welcome back to UCLA!

Pauley Pavilion will soon be re-opening its doors! UCLA will host a variety of events during "Welcome Back Pauley Week" Oct. 28-Nov. 4. Get all the details here: http://ucla.in/PPdr1V

UCLA is committed to making Pauley Pavilion a world-class athletic and cultural venue to serve the growing needs of the campus and the greater Los Angeles community. The transformation of the arena will preserve Pauley Pavilion's mystique while creating a modern, highly-functional facility that will serve as the foundation of success for the next generation of UCLA students and student-athletes.

UCLA has partnered with Seattle-based NBBJ, a leading global architecture and design firm, to expand and renovate Pauley Pavilion into a state-of-the-art multi-purpose facility. NBBJ has transformed the way fans experience sporting events through their work on such projects as Safeco Field in Seattle, Paul Brown Stadium in Cincinnati, Miller Park in Milwaukee as well as Staples Center in the heart of downtown Los Angeles.

* New seating bowl will provide a superior home court atmosphere for fans and students with an increased number of seats closer to the court
* New concourse and lobby space, new concessions, increased points of sale and three times the number of toilets currently in Pauley Pavilion will provide greater convenience for fans
* A state-of-the-art video scoreboard and LED message system will significantly enhance the in-game experience

* New north building will provide first-class amenities for student-athletes
* New locker rooms, film room, student-athlete lounge, strength and conditioning room and sports medicine area will be located in the north building
* Recruits who come to games will witness a new in-game atmosphere that will make them excited to be a part of the Bruin family

* Pauley Pavilion is the largest on-campus venue and will better serve the diverse needs of the UCLA community
* The new configuration will allow for greater campus use for all activities, including intramural and club sports, Commencement and Freshman Convocation and other student events
* The new building will allow for concerts, special events and campus activities, which will continue to bring people to campus

*All images depicted are subject to final design.

Click
to view the photographs from the May 11th Groundbreaking Ceremony.

UCLA Breaks Ground at Legendary Pauley Pavilion - UCLA OFFICIAL ATHLETIC SITE Signaling the start of the transformation of one of the nation's most famous athletic and student-use facilities, UCLA Chancellor Gene Block and UCLA Athletic Director Dan Guerrero led the groundbreaking celebration for the renovation of Pauley Pavilion.

Since the Campaign's launch in May 2009, hundreds of supporters raised over $60 million. While it has been challenging for many members of the Bruin community, we're grateful to those who made gifts & pledges so that we may transform Pauley Pavilion into one that will benefit the entire campus. Please invite friends & family to join us by becoming fans of this page so they too receive the latest updates.