SDSU! Your input is needed in a critical research study regarding outdoor exercise and COVID-19. Would you like to make a difference in trail safety during the COVID-19 pandemic? Answer the following survey, it takes only 3 minutes. Thank you in advance for your participation.
English Version- https://wildernessmedicine.limequery.com/394274…
Spanish Version- https://wildernessmedicine.limequery.com/464931?lang=es
This Wilderness Medicine Research Project is funded by the University of Washington and is IRB approved. Should you have any comments or questions, or would like to be added to the email list for the results, please feel free to contact us via email [email protected]. Your assistance with our important study is most appreciated

Intramural Sports Program is striving to satisfy the diverse degrees of interest in cooperative/competitive Intramural Sports participation utilizing available resources in the most efficient way possible. Aztec Recreation is intended to enhance the quality of education at San Diego State University by offering programs for every member of the Aztec Recreation Center as well as non-members, regardless of age, gender, national origin, religion, physical ability, or past experience.

Hey everyone! We hope everyone's first day back to school went great. The Fall 2016 Intramural Season is now up on IMLeagues and registration is OPEN! We are also accepting applications for Intramural Officials, Supervisors, and Office Assistants. You can apply here: https://as.sdsu.edu/jobs/jobs.php

Have a great school year everyone!

This year we're offering an outdoor soccer and flag football tournament starting August 29th (THAT'S NEXT WEEK!) on the new Recreation Field. This new field is located beside Lot 12 (Old Lot 4) and is freshly turfed for the new year! We're very excited to be programming on a new field this year. The tournaments are capped at 12 teams and go through September 8th.

This is a great way to get a warm-up for the season ahead!

Here are the times the courts will be closed this weekend for the MEN’S BASKETBALL TEAM CAMP. (updated)

Interested in playing sports this summer? Come check out the Intramural Summer 2016 leagues! Registration is now open through June 27.

This team truly mastered the 5 D's of Dodgeball to take home the Spring Season 2 Open Dodgeball Championship! Congrats to Kappa Sig for taking home the crown!

Now, onto our tennis champions for the Spring Season 2!

Today is our opportunity to recognize our indoor soccer champions from Spring Season 2!

It's time to recognize our Spring Season 2 Champions for Intramural Sports!

Today, we are going to begin with our championship teams from basketball!

There will be some basketball, some prizes, and plenty of fun for all! This is a STUDENT ONLY event, so you'll need your valid RED ID in order to participate. More information will be sent out Wednesday evening/Thursday morning regarding the event.

This season, our outdoor soccer championship games were too close to call an MVP in all but one of the games. In the inaugural Greek Co-Rec championship, David Alexander posted a 2-goal effort to lead his team DG & PIKE to victory!

Last but not least in our volleyball MVP tribute, here is Nahyma Castro from team Hot Sets in the Open Recreational league! She was a key contributor on her championship team!

Next up is Steven Silva from the Open Competitive Volleyball league! He helped his team, Take that Block, claim the title!

Our next Volleyball MVP is from the Greek (Sorority) championship. Katelyn Wilhelm led her team, Gamma Phi Beta, to the championship in a very competitive final!

Moving on to our volleyball MVP's, we'll start off with the Co-Rec MVP, Christian Kraft from team Pop a Volley. He towered over his opponents and lived at the net!

Here's another impressive stat line for you: Kory Matsuno from Team Hoop in the Open Intermediate league posted 22 points, 3 rebounds, and 2 assists to lead his team to the championship!

Next on the MVP trail is Chris Horstman in the Open Competitive Basketball league. Chris was out there doing his best Steph Curry impression, putting up an impressive 35 points, 5 rebounds, and 1 assist. Congrats to Chris and his team on the championship!

Next on our MVP list is Jacob Bracken from Kappa Sig! Kappa Sig won a very close game in the inaugural Open Recreational Basketball Championship! Jacob put up 17 points and grabbed 6 rebounds to lead his team to victory! Congrats to Jacob and Kappa Sig!

Our Greek Basketball Championship was absolutely electric! Phi Kappa Theta capped off a great run through the playoffs with a 3-pointer with 6 seconds left to bring home the 'ship! Dane Hollar was named MVP, posting a double-double with 13 points & 10 rebounds. Congrats to Dane and Phi Kappa Theta! 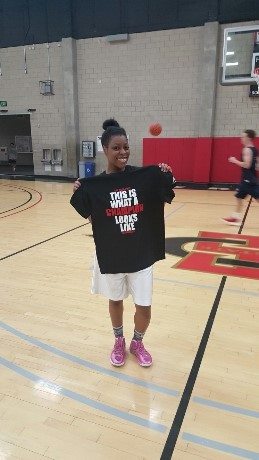 Next up on the MVP list is Jade Pate-Steele who was the MVP of the Women's Basketball Championship. Jade led her team to victory with 10 points & 7 rebounds and some very stingy defense. Congrats to Jade and her team!

Here's something new from this past season! We would like to recognize some Championship Game MVP's. To start us off, here is Joshua Holmes--the MVP of the Co-Rec Basketball Championship. Josh had a great game, posting a double-double with 19 points, 10 rebounds, and 1 assist. Congrats to Josh and his team!

Last, but certainly not least--here is our Open Bowling Champs, Bowl Movements! Congrats!!

Today it's time to recognize the Spring Season 1 Basketball Champs!

Today we are honoring our Spring Season 1 Volleyball Championship teams!

Today we are going to start rolling out our Spring Season 1 Championship pictures! Here we go with our Outdoor Soccer champs!

REMINDER: Grab a friend and sign up for our first ever Intramural Spikeball tournament! The registration deadline has been extended to TOMORROW, Friday Feb. 26th at 5:00 pm. See you there!

Special thanks to our Flag Football Championship referees and supervisors!!

Shout out to Victorious Secret for being out Indoor Soccer Open A champions for this semester! Good season guys!

Other Recreation Centers in San Diego (show all)

Located in the heart of San Diego, Battle Axe is one of the first indoor axe throwing facilities i

Ready to play some table tennis? Come check out one of the finest facilities in the United States! P

You Gotta Have Music!